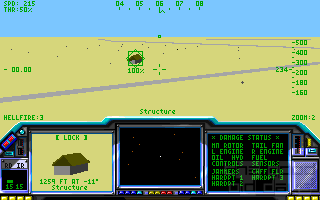 “There are cases when you design something that looks good on paper and there's only one small part of it that's fun. You have to focus on that and throw the rest away.” Brent Iverson, the designer, chief programmer behind LHX and the author of these words did just that. He created a flight simulator that's pure joy to play: not too much of an arcade, which would disenchant less action-prone people, and not too much of a simulation, which would leave 95% of the gaming population frowning. LHX is simply the right blend of arcade, simulation and pure fun.

This game lets you fly four different helicopters on various missions in three locations: Libya, Vietnam and Germany. In addition to the LHX, whose name the game adopted, you can fly the heavily-armored Apache, the robust Blackhawk and an Osprey - a helicopter/plane hybrid. The missions vary enough to make you fly all the planes: some require recon, others a surgical strike, yet others different pick-up and drop-offs. You fly both during a day and during the night, against ground-based and airborne opponents, whose difficulty can be set in five different levels.

The main strength of this game lies in its controls. It takes a while to get used to them, but they are very simple, and for basic flying the direction arrows will prove to be enough. A helicopter can fly at the same level at any speed, so all you had to worry about was the tilting of your machine. Unlike in other simulators, the controls were always locked into position. So, for example, if you turned right, you had to push the left arrow to straighten up again. In addition, the controls were not smooth, but jumped by a preset number. This allowed for a much more exact control of the craft, even though it decreased on the realism factor somewhat.

Graphics and sound were not far behind, either. Both were top-notch for their time. The graphics even went as far as having interactive objects, such as cows and camels on the ground. By interactive I mean that you could shoot them down if you wanted. The graphics gave you a good feeling of movement, while plenty of external camera angles awed you for the first few minutes of playing. In addition, all ground models behaved as they were supposed to: your craft did not penetrate mountains, but exploded at their surface, etc.

Other aspects of the game also deserve mentioning: as far as I know, this is the only game featuring the Osprey, which is still locked in a series of scandals, causing uncertainty whether the craft will ever enter active service. Furthermore, the A.I. was on a very good level: SAM missiles chasing you most of the time, planes and enemy helicopters pursuing you, even on the lower difficulty levels. Finally, your craft reacted to hits - their direction and power - by having the proper equipment damaged, adding a lot to the realism level.

The game, however, had a few weak points. Being no expert on flying, I cannot tell how accurate the craft were to real life. However, LHX seems to be only a spiffed-up version of the Apache, making the later craft obsolete and the one you'd use the least. While the Apache could carry more weapons, the machine gun was so extremely powerful that all you really needed was a few Sidewinder missiles for moving targets; all ground units, even heavily armored tanks could be destroyed by the machine gun. In addition, you did not have to aim manually at all: the machine gun could get locked onto the target and shoot from any angle. Another feature I missed dearly was a more hilly terrain. I always wanted to take a helicopter between hills and fly low, hidden to all enemies. The terrain in this game, however, is largely flat and featureless. The biggest problem I've had with the game, however, was the lack of a save feature. You simply have to fly until you die or finish all the missions. While you can chose any mission you want at any time, the lack of a proper career mode and saving has decreased the level of replayability of the game.

About the author: Brent Iverson is one of the rare breed of programmers who can do both computer games and productivity software. In computer games, he stayed true to simulators: after LHX, he designed the award-winning Chuck Yeager's Air Combat (EA, 1991) and US Navy Fighters (EA, 1995). In the recent years, however, he moved from flight simulators to simulations in general, working on Sub Command (EA, 2001) and Rumble Racing (EA, 2001). He also programmed DeluxePaint II for IBM and Apple II. 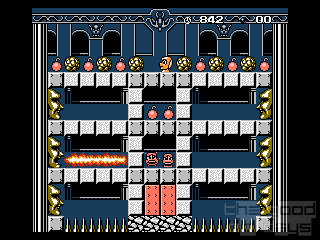