Links: The Challenge of Golf
for PC (DOS) 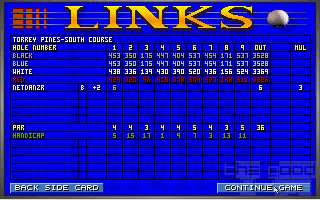 Links by Access Software was the turning point for PC golf games. Before Links (BL), golf games were more or less arcade simulations with blocky graphics, overly simplistic interface and so few options that after several days, you played just about everything there was. After Links (AL), golf games became the most realistic sports simulations around. Links introduced not only photoralistic graphics, but also a whole host of new options, very realistic physics, an unsurpassed interface and a franchise method that survives until today.

When Links came out, it took the gaming world by storm, and even people who never played any other golf games got this one. Developed by the creators of the World Class Leader Board Golf series, Links boasted the best graphics of any computer game released until then. According to Access Software, the designers spent much time and effort going out to the course, played it, took over 500 photos and measured everything. Then, they translated it into 700kB of graphics data, more than for any other golf game at that time. In addition, they used digitized players. The result was absolutely stunning - the player felt like being on the course.

The interface was also greatly improved from other golf games. Not only you could tinker with the player you created, but once you hit the course, you could spend hours just aligning for the perfect shot. You could rotate, set a fade, draw or straight shot, adjust the aim, choose another club and more. This is what made the game so much fun; even after finishing the course several times, there was always room to improve, to try to make a certain shot differently and to see how it goes. The fact that you could enable wind as well only added to the replay value.

All those awesome advances came at a heavy price, however. Maybe the biggest problem was the incredibly long drawing time of every position. The last time I played the game was on a Pentium 100, but even there it took several seconds to redraw the screen every time I rotated a little. This weak code optimization has later become a standard for golf games, becoming one of the bad features that ever survived. Another problem was that the game had still not a perfect interface. You could not enable a surface grid on global settings, for example, and had to do it every time you wanted to take a shot instead. Sound also got annoying in a while. The game featured several very shot commentaries, which brought me to the brink of insanity halfway through the first game.

In addition to obvious advances in gaming technique, the game introduced a new business concept that survives until today. At $40, it was cheaper than most other games, but featured only one course. You could buy extra courses, but the overall price could go way beyond what other games were selling for, without the player ever noticing. This concept survived until today in the form of extra courses for golf games and overpriced datadisks. To make matters worse, the two releases of Links (regular and budget by KIXX) had different course file formats, which caused lots of confusion by many of the game's fans.

If you disregard the game's business model, though, Links was one of the best games to appear in 1990, and one of the most revolutionary sports games. Every single golf game since then has been only an improved version of the true original, Links: The Challenge of Golf.