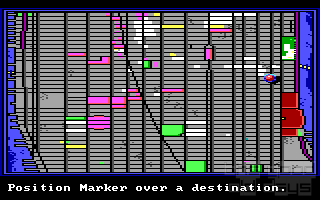 Manhunter: New York was by all accounts one of the most unique adventure games of its time. In addition to a brand new approach to Sierra adventures, it featured a very original story, a very good atmosphere, but also weak graphics, interface and gameplay. I would think that it was the gameplay that sentenced the game to obscurity, which, however, was not deserved.

In 2002, aliens have invaded Earth. By 2004, these floating eyeballs have consolidated their power, and while they have not wiped out the mankind, they did subdue it. In order to keep their dominance, they have trained an elite corps of human manhunters - people who hunt criminals. You are one of these manhunters, set to find a murderer. As the story progresses, you will be more and more dragged into a freedom movement, until you switch the sides and help liberate New York.

This game was groundbreaking in several aspects. First of all, this was the first adventure by Sierra that used a point-and-click interface, instead of the traditional text parser interface. In addition the game was presented in a first person perspective, switching to a third person only when something affected you. Lastly, the game featured interesting futuristic gadgets: for example, you were able to track the murderer's moves on a map, hours after the murder, and try to reenact what has happened.

On the other hand, the game had one major problem, which proved to be fatal for the series: it used Sierra's AGI (Adventure Game Interpreter) engine, instead of coming up with its own one. The AGI has been used for all Sierra adventures to that time. You may still remember the early King's Quest, Leisure Suit Larry and Space Quest series: blocky graphics, third person view, and text parser interface. The same engine has been used in Manhunter, and while it was tweaked beyond recognition, it still had its limitations.

Probably the most important limitation was graphics. In a time when screen resolution was an impressive 320x240 in most games, Manhunter still uses a 160x120 resolution. In addition, the color palette didn't support 4-bit colors well, which resulted into weird color schemes from time to time. Another problem with the AGI engine was in its interface. The engine was designed for text parser interface, and tweaking it for a point-and-click interface proved to be a hard task. Mouse is not supported in the game, and the arrow keys and Tab button get quite annoying after a time.

Another problem with the game was its design. There are certain gaming genres that go well together, and others that simply don't fit. For example, adventure games can be pretty well combined with role-playing and puzzle games and vice versa. On the other hand, action does not go well with any of those three genres. Unfortunately, Manhunter relies heavily on action sequences, which you have to go through in order to finish the game. The action sequences are often very frustrating, especially for somebody who never finished the Indiana Jones adventure games without cheating through the fight sequences there. Puzzles are frustrating as well. Instead of creating a learning curve, puzzles vary between very easy and very hard, with nothing in-between. The fact that you'll end up not using 75% of the items you find does not help either.

In addition to the game design, the story wasn't all that good, either. It is very linear, with absolutely no subquests, and no multiple solutions of the same problem. This meant saving often and when you die, trying a different approach until you got it right. Furthermore, one of the most disturbing things in the plot was the fact that you never found out why your character switched sides and started to fight the Orbs. On the other hand, the graphics, which were very sparse and created lots of empty space, created a very oppressive atmosphere, which fit very neatly into the game.

Overall, Manhunter was plagued by using an outdated graphical engine and having relatively poor design. On the other hand, it featured a very unique world, a groundbreaking first-person view and a quite good atmosphere. For the sake of history, you should try it. Who knows, maybe you'll get to like it...

About the authors. The game has been written by the brothers Dave and Barry Murry, with the third of the trio, Dee Dee helping with graphics. The brothers have been known by that time for designing The Ancient Art of War and the Ancient Art of War at sea, two very early (and very unique) tactical level real-time strategies. They entered the gaming industry in 1984, designing the Sierra Championship Boxing, only to switch to Brøderbund and designing the Ancient Art of War in the same year and Ancient Art of War at Sea three years later. In 1988, they designed Manhunter: New York, their first adventure game. The game shows their inexperience with adventure games: while they have had a great concept, their design of puzzles and arcade sequences left lots to be desired. Their next game, Manhunter: San Francisco, which was released a year later, corrected many of their early mistakes. The brothers later designed the third in the AAoW series, this time called Ancient Art of War in the Skies, in 1992 for Microprose. After that, the brothers disappeared into obscurity.

Moebius:
Quote:
I would think that it was the gameplay that sentenced the game to obscurity

True. That's exactly the reason i never seriously considered playing this game, as it looked too boring and actionless. I'm sure it's due to my narrow-mindedness at the time, but now at least 15 years have passed (can't believe it!) and i still feel the same about it. Perhaps one day... 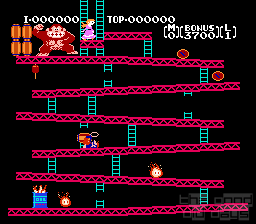