Lords of the Realm
for Amiga (AGA) 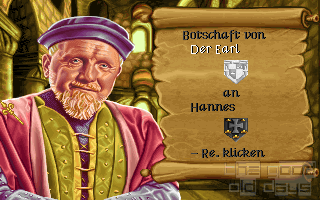 I have conquered medieval England countless times in countless variations (i.e. games) already. All the mixes have very similar flavours, the differences are marginal. In such a (once) overcrowded genre, these little things count though!

Lords of the Realm stresses the economical development over warfaring. Each shire's population under your rule can be divided into different jobs, taking care of food production and producing goods.

What many games of this type don't take into account is that there are different kinds of food. On the other hand, it's of course silly to distinguish between too many things. Cows 'produce' milk which feeds part of the population on a regular basis. You can of course also slaughter the cows themselves. The last 'food group' is grain which you can grow on fields (and of course needs farmers to attend).

If too many fields are occupied, fertility decreases, crops die, cattle can't be fed. Crowding too much cattle on one field has a negative effect on herd growth of course.

This is just to serve as an example for the interconnected economy. The other products (wood, stone, weapons,...) work in a similar way. There is an upper limit of growth and production though - that is what they don't teach 'economists' at university

Of course, there is still a war to win, no matter how great you manage your county. Bands of mercenaries roam around the country offering their services to anyone who is able and willing to pay. Drafting your own people is less expensive, but reduces the productivity of course.

Your first enemies are disorganized groups of peasants trying to secure their independence. No match for a properly armed and trained army! All the counties you conquer have to be maintained the same way as your home one of course.

As you expand, you meet your competitors, other royals you have to beat on the 'field of honour'. Some rudimentary diplomacy with “The Earl”, “The Bishop”, “The Countess” and “The Knight” is possible, but to be honest, quite useless.

Battles are fought in real time. Unfortunately, they are one of the downpoints of the game. With the right 'strategy', you can win even objectively hopeless battles: order your 100 swordsmen to stand in the 'corner' of the battlefield (so that they can't be surrounded) and let the hordes of peasants attack (several thousands should be no problem). Because of the morale of the enemy units plummetting immediately, you can chase them all away!

The second problem is related to the military part of the game, too. It is never really possible to defend your territory. Or let's rather say it would be possible, but it's not smart because if you use the same armies you could station in castles to attack, you will have a lot more gain! Trying to defend only always produces a stand-off with neither side being able to build up a really sufficient army. Offensive strikes leaving your back unguarded are rewarded.

That is really a pity because on the theoretical defense-side, you can build completely custom castles by placing different kinds of walls, moats and towers. Sieges are taking place directly on these self-made fields. A very unique and interesting concept. Unfortunately, you'll quickly notice the safest castle is just a tower with as much water around it as possible...

The great economic model makes Lords of the Realm a true classic to me! It's perfectly balanced, introduces the concept of controlled growth very well. The military part is not so well executed even though there are some very nice ideas (castle design). That is why I mostly play it on the economically highest difficulty, but low military one. This way, it's most fun - so I strongly recommend Lords of the Realm to anyone who is able to stand slightly silly battles in a game about macroeconomics.

yea this is in my all time favs.. together with colonization and transport tycoon

the music is among the best even now- simple yet beautiful 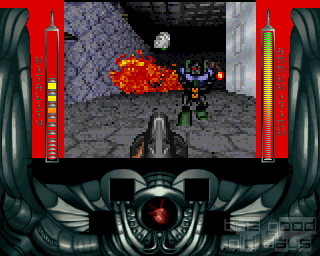