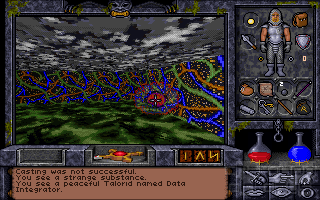 After the events of Ultima VII, the Guardian takes a last chance action, imprisoning Britannia's Castle in a blackrock dome. But this powerful magic disrupts the fabric of reality and opens a gate to other worlds.

A world dominated by goblins, a frozen one, an underground prison and even the psychotropic ethereal void are among them, all of them feeding the power of the Guardian, who slowly in each world, giving his help to a faction, has become indispensable.

Some of them are dangerous, and sometimes you will have to make your way with your weapon. But luckily, like in all Ultima games, normally there is a way to avoid fights, sometimes very drastical ones. The main part of the quest will be spent exploring, and talking to people, to discover where the bonds that give strength to the spell are, and of course undoing them, but that is much easier.

Exploration keeps an important role. The worlds are not very big, and you may feel like being guided through the game, but it is not completely linear and gives places to find and secondary quests to do.

The quests supposedly have more than one way to be solved, which I found true in the ones with difficult battles at least, something to be expected with the freedom one feels when playing, and the spells that do more than just killing. When I got stuck, it was my fault for throwing something away, but there should be a handful of important tools, a pickaxe in this case. After all some vital objects can be found in more than one place.

Generally, apart from that, the gameplay has been improved with things such as trainers instead of shrines, the possibility of getting lost, which avoids the automap from working, or having more hidden spells, and also the most noticeable, the graphics.

This is one of the few RPGs I played. Quite fun for a few hours. Here's some things you should try:
- carrying all the books from the library into the dungeons
- attacking the king repeatedly
- stealing equipment from the Avatar's friends

And so on. All the silly stuff - the fun thing is it actually works, so you don't have to stick to predefined paths. 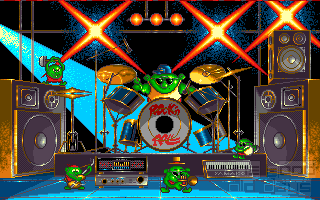