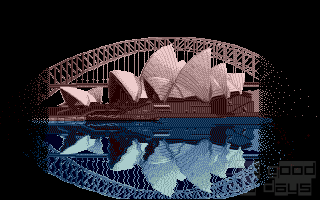 The strangest thing happened with my floppy disk of this game. It would stop loading in the middle of the booting process. I thought it was hopelessly broken - wrong. All I had to do was take the disk out of the drive and put it in again, and it would continue loading as normal. Of course, this happened several times every time I loaded the game, so playing became quite a piece of work. Even with several years of university behind me, I still can't figure out a logical explanation for this behaviour. An unsolved mystery of computer science.

However, I did take the extra effort to be able to play the game often enough, and that should tell a lot about its quality. Great Courts is a very simple tennis game. You're starting at the bottom of the ranking of the world's best players and by playing the four grand slam tournaments (Australian Open, French Open, Wimbledon, US Open), you're (hopefully) slowly crawling up.

There are three levels of difficulty. The easiest one gives the player a lot of support, making it easier to hit the ball and to get it over the net at all times. The intermediate one takes some of this automated support away (like for example the guaranteed successful service) and the expert one makes it necessary to move very quickly in order to hit the ball the right way (forehand or backhand).

Managable playability, good graphics and responsive controls make this game stand out from the competitors. If I had to choose one bad thing about it, it'd be the sound. Stupid 'boing' sounds when the ball hits the net just don't cut it. This is hardly worth elaborating on, though. What's more interesting is room for improvement. Even though it is already a very good game, after playing some time, limitations become obvious.

For example, there are only the four tournaments mentioned ealier, so there's no distinction between 'major' and 'minor' ones which the player has to choose from in some kind of 'career' mode. Even these four don't actually change the game at all. The type of court (sand, hardcourt, grass) is represented graphically, but it has no effect. Same for the 63 other players. Apart from their names, there's little which makes them unique. They all play in the same style and it's even hard to see any quality differences. The competetive two-player mode is pretty much unusable, because the player on the back of the court is at a huge disadvantage anyway. Last, but not least, the training modes are a nice idea, but entirely forgettable.

This is not meant as harsh criticism, but rather as suggestions where to improve even more. The standard tournament mode is enough fun to keep you motivated for a long time. Personally, I've never found a better tennis game.

Note: In some countries, the game has been released as Pro Tennis Tour. Nothing but the title screen has been changed.