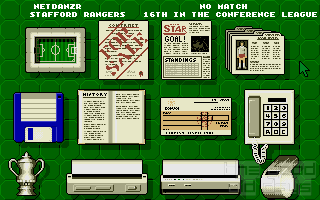 Released roughly at the same time as the first Championship Manager, Premier Manager was different enough to attract its own crowd of fans. This game has started a battle that, in a sense, rages until today: a battle between two styles of soccer management games. Where Championship Manager was heavy on different statistics and on putting together to optimal squad for each match, Premier Manager by Gremlin, and later its spiritual successors – Premier League Manager and Total Club Manager series by EA – took on a more user-friendly approach and mixed in the business and training aspects of managing a soccer team.

Premier Manager was by all means an interesting product, but in hindsight it featured a very inferior interface and simplified managerial concepts. In this game, you assume the role of the general manager of a Conference League team in Britain. Conference League is the fourth tier of the British league system, and, presumably, the lowest that employs professional players. In this open-ended game, your goal is to build up the best possible team, advance to higher leagues, and eventually become the best team in England and in European cups. To do so, you will need to by better players train the players you already have and improve your stadium in order to accommodate larger crowds. In addition, you will take care of the club finances – hiring people, signing sponsorship deals and determining the price of tickets.

After you start the game and select a team, you will be presented with the main screen of the game. Here, you will be able to access the current standings, read news, adjust your team lineup, order training strategies, access the advertisers menu, inspect the team's finances and play matches. Your players will have four basic statistics, each being important for a certain king of a player. Handling is the determining statistic of the goalkeeper, tackling is important for the defender, passing for midfielders and shooting for attackers. Overall, your team will be rated in each of these fields, and this rating will greatly affect the outcome of the game. You will be able to change the basic team strategy by assigning a number of players to each position and by selecting a style of play, but these have very little influence on the game. Thus, it is much more important to trade players and train them. To do so, you can either use the transfer list or hire a scout who will try to find specific players for you. If you want to get rid of some players (important especially for earning some money and saving on their salaries), you can place them on the transfer sheet as well. Over the course of the game, you will be never satisfied with your team, and always find better players, changing the whole team composition as often as once per year. Fortunately, the game is not complex enough to measure the reaction of your fans.

Once a match starts, there is very little you can do. The match interface introduced a text mode that has been used with small modifications until these days: on the top, there is a bar that shows the approximate position of the ball at any given time, relatively to the goals. A small window shows all interesting actions – fouls, shots, corners and more. In addition, all goals are recorded. You will have the chance to interrupt the match at any given point and exchange players or adjust the team strategy as well.

What I like most about the whole Premier Manager series is the fact that it concentrates heavily on the business aspect of managing the team, and doesn't overwhelm me with player statistics. In fact, when managing your players, the game assumes an almost role-playing quality: the players' statistics are greatly simplified, and they can be changed over the course of the game, through training. Early Championship Manager games did not have this option. Not only that; Premier Manager I is the only game that I know of where you can play teams from regional leagues (below Conference League) and look for players there.

However, not everything is rosy with the game; there are several aspects that harm the gaming experience a little. Probably the worst aspect of the game is the interface. While you can use the mouse, the game features a rather unorthodox way to switch players, and in some screens (especially the advertisers menu) it does not offer an efficient interface. In addition, the game is still a little too simplistic. That is apparent especially in the advertisers menu, where you don't get enough information about the contract conditions, and only paid-in-cash contracts exist, as opposed to the optional pay-per-week contracts that are available in later games. This relative simplicity is also apparent in trading players and scouting for new ones. Finally, there are some features that seem to be scripted. For example, throughout the years I have never had a game where a team scored more than four goals, conveniently the maximum amount of players from a given team that fit on the goal-scoring section of the match screen.

Overall, Premier Manager is a valiant effort at a soccer management game that is different from the number-crunching Championship Manager. However, due to a weak interface and relatively simplistic management model, the game falls a little short of the first Championship Manager game, a deficit that its successors were never able to fully eliminate, even though they improved dramatically. 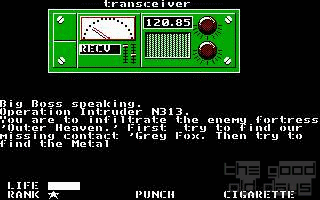