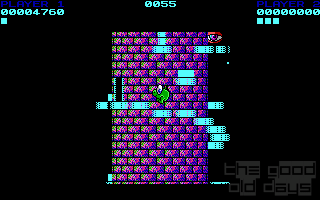 Nebulus is one of the most addictive puzzle arcades I have ever played. First encountered on my Spectrum, the game has followed me ever since, and still graces my hard drive. Created by the same people who released the hellish Impossaball, Hewson, the game is a little simpler, but even more addictive.

The goal of the game sounds simple: you need to climb up a tower, initiate its destruct sequence, and make your way to the next tower. Rinse and repeat, once for each of the eight towers. To make matters worse, there are lots of flying, bouncing and sliding nasties who try to knock you down the tower. You will have only a limited power against them: some you will be able to kill for extra points (when you get enough of them, you get another life). Some you will be only able to stun. Yet others will be immune to your snowballs, and the only way around them is sneaking or jumping.

What made the game so addictive and unique was a whole new engine, unheard of before. Back in the 1980s, if somebody told me that I would climb a tower, I'd get the picture of a stationary screen with platforms and ladders, Donkey Kong style. Nothing could be farther from the truth, however. The game featured round towers that rotated, with your character always in the middle of the screen. This allowed the designers to use extensive stairways instead of ladders, and some rather unique methods of killing. Your most common way of dying would be falling down into the water below the tower. If you made it quite high up the tower, this would require you to suffer several hits, which greatly decreased the amount of frustration. Don't worry; you would have enough frustration with the game. In addition to a limited amount of lives (3), there was also a 500 seconds time limit, which I found unbeatable at the latter, more devious towers.

Where the game failed was originality and graphics. The graphics were a little weak even for a Spectrum game, and improved only slightly on a PC. However, at the time I have gotten it, I was in love with another Spectrum game, Jumping Jack. Nebulus was nothing more than taking the flat screen of Jumping Jack and bending it to create a rotating tower. The game also took away much of the action, replacing it with puzzle, creating an almost unbeatable combination. Still, as it is often the case, the more popular game prevailed. While Nebulus is known until today and present in many arcade compilations, nobody ever remembers Jumping Jack anymore. If it weren't for Jumping Jack, Nebulus would have been one of the most groundbreaking games ever. This way, it is “only” one of the most addictive, playable and fun games you can get your hands on. 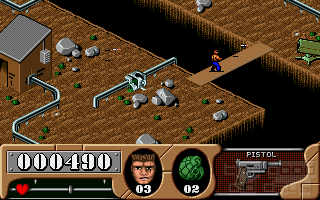