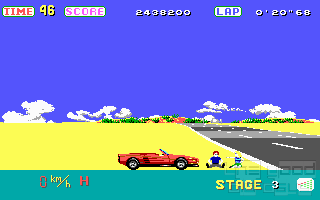 Remember those old coin-ops where you sat in a cage that rocked with you as you raced a car? The first one I came across and was immediately fascinated with was called Outrun. You were racing a Ferrari Testarrossa through cities, along beaches and over mountains. The sound, video and chair movement were so realistic that even before I sat in a real car, I knew how to drive (or so I thought). Outrun for PC is the best Sega could do to convert the original game.

To be honest, the conversion is pretty much a disaster. Sound uses only the PC speaker, and is reduced to a series of beeps and a beep-like tune at the beginning. Graphics are much more flat than I remember them. While the game still offers some interesting backgrounds, once you hit the road, you will soon get bored of all those two-dimensional sprites that should represent other cars.

The gameplay suffered even more. The basic premise is still the same: race through five checkpoints, trying to beat the clock, in order to win the race. The most unique feature of this game is that there are altogether 16 tracks leading from start to finish, but many run parallel of each other, so you will always select only one of them. This adds somewhat to the replay value of the game, but considering the extreme difficulty level, the additional time to play may easily become only more frustration. While I got pretty proficient in the coin-op version, I must admit that I have never managed to finish a race in the PC version. The difficulty is so high here that you will try to replay the races over and over again, without much chance at ever finishing.

The PC version of Outrun serves two main purposes. First, the coin-op version is a little bulky to have at home, and the PC version can serve as a nice memory of one of the best coin-op games of all time. The second purpose is that Outrun should serve as an example that some games should simply not be converted to the PC. Doing so may produce disastrous results.

Xreel:
Outrun is such a classic game cool to see that it was ported to ms dos and it looks better than the master system version
Vreyes:
A good game...:D
[Reply] 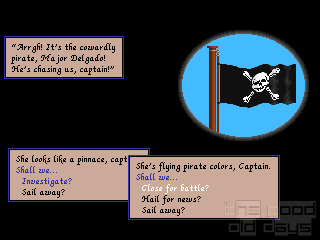