In the far future. After a nuclear war, part of the human race has mutated and now form two new races: the Tuners who look human, but have PSI powers (reading other people's thoughts, telekinetic powers,...), and the Protozorqs, humans with lizardlike heads. The latter live in huge temples which inspire fear into passers-by. There are rumors about humans and Tuners disappearing into these without leaving a trace.

The young Tuner Raven is convinced the Protozorqs have kidnapped his girlfriend and are holding her prisoner in one of the temples. To gain access to it, Raven pretends to apply as a servant there.

This is where the game begins. Raven has to fulfill five trials set by the priests to be accepted. Only then he'll get deeper into the temple. Each trial involves strange bio-mechanical monsters from which you have to retrieve a skull to give the priest. In the inner sanctum of the temple, the real fun starts...

Kult presents itself in 1st person point & click style. The cursor reacts to the touch of important objects at the location, a click on them opens a context menu of fitting verbs. Not all of them are of course needed or even positive, but they are imaginable alternatives. That is a very good concept because it proposes ways without giving aways too much.

In addition, you have a sidebar with your inventory and a menu for your PSI abilities which you can use at any time provided your telekinetic powers haven't been drained by permanent use too much.

The puzzles are mostly ok and logical, sometimes they depend on trying everything out. The graphics are technically mediocre. The main window is too small, sprites are quite tiny. Yet, the graphics are the strongest side of the game! The whole game is made in a weird style which I already tried to hint at before. It is a bit hard to describe, if I said 'Giger' now, I'm sure some purists would jump at me in a not-so-desirable way. Maybe it is better if I describe the whole setting as inspired by H.G. Wells' Time Machine, but in a weirder, twisted way.

The aestetics of the graphics and settings are supported by an extra dose of weirdness from a fetus-like creature in the upper left corner of the screen who comments on your progress in a phonetical way - sometimes hard to decypher, but also sometimes very helpful.

Last but not least, I should add that the game is not fully linear. There are two ways of solving it: playing along with the Protozorqs' rules and fulfill the trials or cheat them to sneak in. So you can at least replay it once.

Kult may be a short game, but at least what's there is good. Being a French production by a then relatively unknown team, it never got as popular as some games of similar quality. So now is your chance if you missed it first round! 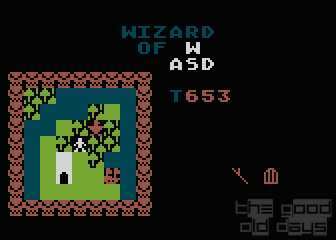