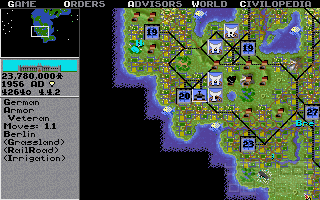 Without any doubt, Civilization is the greatest and most addictive game that ever graced a computer screen. Designed by Sid Meier, who at that time was already a household name among gamers, the game introduced the world to a new level of empire management: from settling whole continents, through researching new technologies, to building military units, city improvements and even wonders of the world. The game has spawned several sequels and copies, out of which only a single one (Alpha Centauri) comes close in the terms of gameplay and overall fun. Civilization has never left my hard drive, and probably never will, remaining the main reason why I still keep MS-DOS on a separate partition.

In Civilization, you play as a leader of a nation. At the beginning, after selecting the interface and world properties, you will be able to choose from one of fourteen nations to lead. There is not much difference between the nations, but the computer always selects the same opponents, so after a little practice you will figure out which nations it is easier to play the game with. After selecting one of the five difficulty levels, you will be dropped with a single settler somewhere in the world, and from then on it's up to you.

Your first task is to establish a city. Each city will take advantage of the eight surrounding squares, and thus the placement is very important. Some terrains, such as mountains or deserts, offer very little in terms of food and production; others, such as grasslands are great for growing crops. Rivers add trade bonuses, as do roads, which you will be able to build later. For now, it is important to have a steady supply of food to see your population increase and a good supply of production (represented by shields for some reason), which will allow you to build city improvements and military units. Later in the game, you will need those production shields to support your units as well.

When you establish your first city, you will be prompted to select a technology to research. The rate at which you research will depend on your income and what a share of it you spend on research. As you discover new technologies, you will be able to build new city improvements and units. The city improvements can be divided into six categories: defense (barracks, city walls), city growth (granary, aquaduct), research (library, university), production (factory, power plant), happiness (temple, cathedral) and trade (marketplace, bank). Each improvement costs a certain amount of money to maintain, so you will need to keep a balanced budget. You will also be able to build unique structures, wonders of the world, which will give you certain advantages.

To make matters even more complicated, your people will be unhappy with some of your decisions, and you will have to keep them at least content. This is being achieved by some of the structures, or spend part of your income on luxuries. As you can see, your tax income will be divided into three categories: income, research and luxuries, and you will have to carefully balance all three.

Over time, you will establish other cities and improve the land around them. Special units will be able to irrigate some terrain squares, build mines on others ands build roads (and later railroads) almost everywhere. Other units, caravans, will be able to increase your income by establishing trade routes between different cities. Then there are the military units, ranging from militia to nuclear missiles. If you feel that playing a cloak-and-dagger game is more your style, you will have diplomats available, who are able to bribe enemy units, destroy city improvements and do other nasty tricks to your opponents.

All those units will become very important: sooner or later, you will run into other nations, with the same goal that you have: destroy all opponents or be the first to build a spaceship and colonize Alpha Centauri. From the first meeting on, you will be able to build diplomatic ties, declare war on each other, demand tribute, exchange technologies and more. The designers' ingenuity went as far as to allow you to learn much about the other civilization on your meetings: the number of people on the screen indicating the size of the civilization, and their appearance indicating the form of government. That's right, you will be able to change your government as well. All forms of government have certain advantages and disadvantages, and depending on the stage of the game (and your technology) you will be able to choose which government to use.

All this sounds like a very complicated game, but thanks to the detailed manual (which set a new, unsurpassed standard for manuals) and the relatively slow introduction of more advanced game principles, learning the game is very easy. Mastering it is the hard part?

While the concept of the game is absolutely perfect, the technological aspect is a little weaker. I can say nothing bad about the interface. In current standards, the interface is rather bad, but in 1991, it was very simple, allowing the player to use a drop-down menu when he didn't remember a certain shortcut. The graphics, too, are simple, but very well visible, allowing absolutely no confusion. In fact, I like them more than the flat and lifeless graphics in Civilization II. However, the game absolutely fails in the area of artificial intelligence. Not only the opponents are dumb and predictable, but higher difficulty levels simply make the game harder for you and not increase the intelligence of the opponents. The stupidity of computer-controlled nations is most apparent in diplomacy: they have no memory, allowing you to sneak-attack them and sign peace over and over again.

Still, despite these shortcomings, Civilization is the one game every self-respecting gamer should play. Even after all those years and several sequels, it remains highly playable, mainly because of the delicate balance that was achieved here, and never repeated again. The game is much more simplistic than its sequels, and it is this simplicity that makes it so easy to learn and so hard to master, and that allowed the designers to tightly control the balance throughout the entire game. The game has justifiably been named the best computer game of all time by many magazines, and fortunately is still sold. SO what are you waiting for? Go and get it now.

The Civilization series has an interesting history, having gotten progressively better (minus 5), but progressively more and more abstracted. Whereas Civ6, possibly the best in terms of gameplay, is completely abstracted from the real history – just a very fun board game - the original Sid Meier's Civilization contains what is probably the most realistic simulation of all of human history that you could fit in a 1991 DOS PC with 640K of RAM. This is especially helped with the excellent manual, in the classic MicroProse style, which goes into extensive historical detail, explaining how the things you're doing in the game represent the real things that really went on in history. Reading that manual, and playing this game, it truly feels like you're experiencing history. It also contains more simulationist elements that later games in the series, partially because of a lack of balance. It is a fun experience to start out on a tiny island, unable to leave, and suddenly have another nation show up with vastly superior technology.

But what of the gameplay? Well, it is a turn-based strategy game. You start out with a Settler unit, which you can use to construct cities. Your cities gather production, food, and trade from map tiles. They use food to grow the city, trade to produce tax income and scientific research, and production is used to produce city improvements and more units. The more cities, the more you can do. Expanding your civilization while keeping your military up is a major part of the game. You use science to explore a technology tree, one of the first instances of such a gameplay concept, gaining more and more scientific advancements, allowing for more city improvements and more units. You need to make sure you're technology is kept up compared to your opponents, or else they can defeat you in war. And other civilizations are a major problem in the game, having the same ambitions as you. This lead to a famous bug: Gandhi, leader of India, was supposed to be the most peaceful leader, with his "warlike" level in his AI set to 0. But, this number changes during gameplay due to diplomacy, so when you do anything to make Gandhi like you - such as simply exiting out of the diplomacy screen - well, Sid Meier (being the only programmer) forgot to write an overflow check. Gandhi's "warlike" stat then wraps back around to MAXIMUM ANGER, and he will do anything he can to try and kill you.

The game ends either after a maximum date, when your civilization is defeated, when you defeat all other nations, or when you win the "space race" and send colonists to Alpha Centauri to lead humanity into its next leap.

One of Sid Meier's best games, and still a worthy entry in the series. The only real issue is the gameplay aspect where you can't move units too close to enemy units, which leads to very frustrating movement around the map.

Mr Creosote (2020-06-08):
Originally posted by Herr M. at 19:16 on June 2nd, 2020:
Though I have to say: The most interesting part is the beginning and things lose a lot of steam as soon as you hit the industrial revolution. Probably because for one things get repetitive and for two by then you have practically won the game and you are just going through the motions until you eventually win.
Indeed, once you reach conscription and armors, there is nothing to stop you anymore usually. The computer opponents are really only dangerous in the early game. Typical problem with AIs

NullVoid (2017-11-04):
Ah, yes, that feeling of "just one more turn" until I was surprised by the sun rising in the east, and I had to be up in a couple of hours for school. It had a few humor elements built in, which were thankfully phased out in the sequels. My favorite is still II, though.
maxthebuch (2015-10-09):
Civilization war eines der ersten PC-Spiele die ich meistern durfte. Das gründen der Städte und das Forschen nach neuen Technologien hat in mir die Abenteuerlust geweckt. Noch heute ist es ein sehr gutes Spiel. Es ist nicht zu kompliziert und dennoch hat man viele Möglichkeiten ein Spiel zu gewinnen.
[Reply]