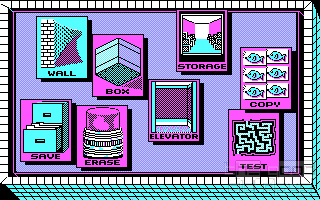 Sokoban was created by Hiroyuki Imabayashi in 1980, and won the first prize on a computer games contest. Two years later, Thinking Rabbit, Mr. Imabayashi's company has released the first commercial version of Sokoban. The game has often been reproduced, and remains as addictive today as ever.

The object of the game is very simple. You are a warehouse worker, and need to push crates from various parts of the warehouse to the designated area in as few steps as possible. This sounds easy, until you realize that you will only be able to push the crates, never pull, and only one at a time. The initial levels are relatively simple, but the game gets progressively harder, and the last few levels often require hours of strategizing.

Soon, the original Sokoban was overshadowed by its most successful clone, Sokoban by Spectrum Holobyte. This version included 50 levels, which became the standard for the game, and an editor for the player to create an additional 50 levels. The game soon became a cultural phenomenon, and until this day, there is a small, closed subculture of level designers.

The ultimate failing of Sokoban was in its simplicity. The levels could be very easily copied from one version of the game to the next, in what became one of the most blatant copyright violations known to this day. Many Sokoban clones were created, and once the interface was in place, the puzzles could be copied without a serious problem. Because of this, many level designers never published their work, only traded them among themselves. From time to time, one of those levels gets leaked, showing a glimpse of the wondrous, secret world of Sokoban only few of us will ever see.

Despite this failing, Sokoban fully deserves its post next to games like Tetris, Chess and others. It combined an extremely simple and easy to learn concept with an unprecedented level of strategy, and allowed the gamers to add to it further by creating their own designs. Until this day, Sokoban can be the most difficult, yet most addictive and beautiful puzzle ever to grace a computer screen.

wontell:
I love this game, I'm not as old as to say this game released in my childhood but I was introduced to it from my mom. For some reason I always liked the colors, this and Doom were the first games I played.
Mr Creosote:
That is CGA in all its 'glory'. There were only two possible colour palettes, with four colours each. This one is the uglier one, in my opinion, but it is also more common. The reason being that these colours are designed to be distinguishable even on the worst displays.
pepsiman:

This game is truly a classic. Way better than tetris imho, because it's not as stressful.

I've always been wondering why they picked such shitty colors, though. Or was it that back in the days computers were all pink and teal?

NetDanzr:
Feel free to share anything about Sokoban (1984) here!
[Reply] 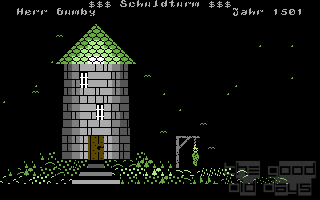