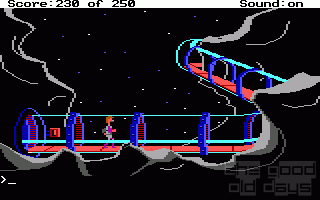 Released only a few months after Space Quest I, the sequel, named Vohaul's Revenge has brought little new. In fact, if I felt nasty and unthankful, I'd say that the game was one of the first cash cows in the history of PC gaming. By today's standards I'd be right - inept puzzles, the same graphics, lack of the same humor I remembered from the first part and a very short gameplay would automatically qualify a game as a rip-off. At least in my eyes; in fact such games seem to be very successful and highly regarded by certain gaming magazines. Back in the days, however, we were happy for the little we got and paid for it accordingly.

Space Quest II puts you back to the role of Roger Wilco. Actually, you will be able to choose your own name, so the only reference to poor roger was a comic book featuring our hero, which has been included in the original box. It seems that your heroic act gave you your fifteen minutes of fame, which are now over. After that, everybody seemed to forget about you, and you ended up as a janitor (an inept one, I may add), on an orbital station. During an assignment to clean up a spaceship you are kidnapped and brought before Sludge Vohaul who you defeated in the first time. He is bound on revenge now. You are about to spend the rest of your life in a labor colony, while your home planet, Xenon, will be destroyed by an invasion of door-to-door life insurance salesmen. The transport getting you to the labor colony runs out of gas, however, and crashes, giving you the opportunity to save the world again.

The game uses the Sierra proprietary AGI engine. This means 16-color graphics, quite blocky, and a text parser that you use to interact with the environment. The game actually seems bigger than the previous one, but only because of so many different ways to die and two frustrating mazes. Puzzles are mostly very counter-intuitive, with the exception of a few flashes of brilliance, and jokes a little stale.

There are a few positive aspects of the game. Unlike others, I am very fond of the theme song of Space Quest II, which was one of the best PC melodies at the time the game was released. In addition, a few puzzles that let you combine items were the work of a pure genius - logical, simple and very effective. Lastly, there were a few instances when you had to laugh loud. For example, at one time you were dreaming about being Larry from the Leisure Suit Larry series. At another instance, you found an inscription reading “Sir Graham cross dresses”, as a reference to the King's Quest series. You could even cheat to achieve more than the maximum points, look for condoms and much more.

Sadly, there are enough downsides to this game to make it possibly the weakest of the series. The main problem was the addition of two very frustrating sequences. In the first one, you had to move through a maze on the ground; touching one of the walls (actually a plant) would mean instant death. Considering the level of graphics, this maze was pretty frustrating. The other frustrating part was when you moved through a maze consisting of tunnels and ladders, with only your immediate surroundings being illuminated. As in other instances, the maze could turn out deadly. The other problem with the game was simply the massive amount of inept puzzles and lack of information. Some puzzles were really low-grade. For example, you had to blow a whistle at a certain screen, but you didn't get any information which screen it is supposed to be. In addition, you were allowed to access new sections of the game without collecting all the items necessary to finish it, making it unplayable. As for lack of information, one of the puzzles was to select one of two tunnels. One of them meant instant death, but you didn't know which one. Such choices were very common in this game.

Overall, the game is still worth playing in your spare time; it should take you a day or two to finish it. It should also serve as an example that releasing games and hoping for huge sales because of their predecessors is not a strategy that's unique to the current gaming market.

Moebius:
Originally posted by jamespat at 19:09 on May 1st, 2020:
I downloaded the images of space quest 2 identified with number 000367, where in the notes says to be version 2.0c (the one that I need), but unfortunately they are not the right images as they refer to version 2.0d, is it possible to know if the contributor manages to attach the correct images? Thank you

Sorry, it was a mistake. We don't really have version 2.0C nor was it ever available. Information corrected.

jamespat:
I downloaded the images of space quest 2 identified with number 000367, where in the notes says to be version 2.0c (the one that I need), but unfortunately they are not the right images as they refer to version 2.0d, is it possible to know if the contributor manages to attach the correct images? Thank you
NetDanzr:
Feel free to share anything about Space Quest II: Vohaul's Revenge (1987) here!
[Reply] 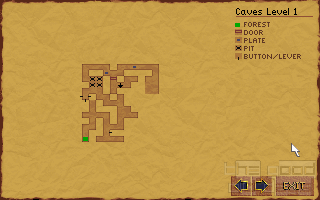