Sword of Aragon
for PC (DOS) 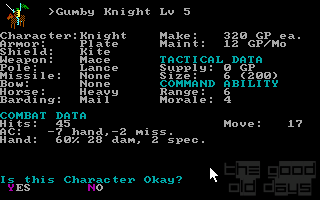 Sword of Aragon is one of the most underrated games ever. This game has the full right to be listed among the top ten games of all times, yet I have never seen it listed at all. At a time when games offer flashy graphics and very simplistic and inadequate gameplay, Sword of Aragon shines as an immortal gem. This game does not require the same level of graphics and sound to be interesting: it combines complex economy, diplomacy and tactical combat in one neat package, reinforced by a very simple interface. It offers very complex and lengthy gameplay, yet the learning curve is very low. Overall, the game, is the pure essence of excellent design end execution.

In the game, you assume the role of the son of the late Duke of Aladda, who was slain by a goblin attack on your town. As soon as you take over the title, the goblins return to finish what they started. It is up to you to defeat them. Once you do so, you can concentrate on your main task: rebuilding your town to its former glory as the capital of the whole continent.

To do so, you will have to build mines, farms and industry. Each will help you to keep your subjects happy, make it possible to raise armies and will allow you to engage into foreign trade. Diplomacy is closely tied to economy in more than one sense. In addition to negotiating trade agreements, from time to time you'll be asked for certain concessions if you wanted to establish an alliance. For example, to ally yourself with the elves, you will have to cease all wood harvest.

Combat is handled in a tactical map, where you will have total control over your units. In fact, you will engage into combat as well, as will your companions who arrive to offer their services from time to time. Combat is fairly complex, with units being able to take advantage of terrain, some of units being ranged, your companions capable of casting spells and more. All units gain experience and get stronger as they survive more battles, a feature way before the time of Panzer General games. You will need this extra experience a lot, as the game gets progressively harder.

On the negative side, I've got some gripes about the economy and the game scripting. The economic growth is not indefinite. In fact, there are rather strict results on the number of mines and industry. The fact that you'll have to stop wood harvesting (or face the wrath of the elves) limits your economy even further. The biggest problem, however, lies with the scripting of the game. The game is strictly linear, with the same events being triggered at roughly the same time. This limits your freedom a lot, which in turn limits the replay value of the game. Basically, once you finish it, you will lose a great deal of interest in playing it again.

Still, if you did not play the game, you definitely should. It offers something that is very rare today: substance over form.

NetDanzr:
Feel free to share anything about Sword of Aragon (1989) here!
[Reply] 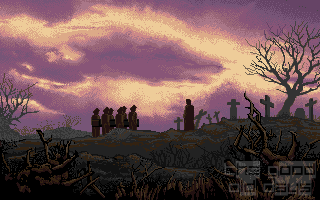