The Pyramids of Egypt
for PC (DOS) 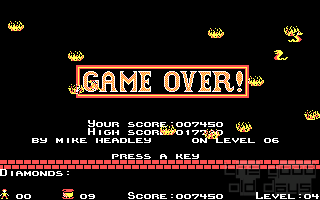 Before there was idSoft, there was Ideas from the Deep. And before there were 3D shooters, there were Pyramids of Egypt. True to idSoft's later games, this game is an arcade that requires quick thinking and some tactical-level decision-making.

In this game, you play the role of an explorer going through tunnels of ancient pyramids. Your task is to collect diamonds. True to other arcades of the same time period, you are able to leave the level (and gain an extra life) only after you collect all the diamonds. Your life is not easy, however, as deadly cobras are trying to make hell out of it. You can either avoid them of kill them with fire, which can only burn in several places, and which requires cans of kerosene, which is in quite a short demand. This concept, with carefully designed levels that include some extras, such as automatic doors, proves to be surprisingly entertaining. Due to the fact that most of the time you'll be able to finish the levels without killing any cobra, the game has a relatively high replay value: you can challenge yourself to kill few or no enemies at all after you finish all the 40 levels the first time.

There are a few downsides to the game, however. First of all, there is no save feature, and so you'll be forced to play as long as you last. While some levels take two minutes, in others you have to be very patient to get the cobra out of a nasty trap, so the whole game can take hours. In addition, after you die, you are resurrected (providing you have any lives left) on a random square. Often, I materialized right in front of a cobra. Lastly, both cobras and you are able to move diagonally. In a strict square-designed labyrinth, this takes some time to get used to. In addition, some doors can be avoided by moving diagonally around them, which makes them useless.

Unlike what I stated previously, Pyramids of Egypt is not the first game published by John Romero. The author corrected me by pointing out that his first game was created in 1979. In addition, his first published game was Scout Search in 1984 for Apple II. Pyramids of Egypt is also a port from Apple II. The original version has included 100 levels as opposed to PC's 40, and had less confusing color scheme, Mr. Romero pointed out.

Overall, the Pyramids of Egypt offers some nice waste of time on a rainy afternoon, but it lacks the longevity of other idSoft's titles.

NetDanzr:
Feel free to share anything about The Pyramids of Egypt (1985) here!
[Reply] 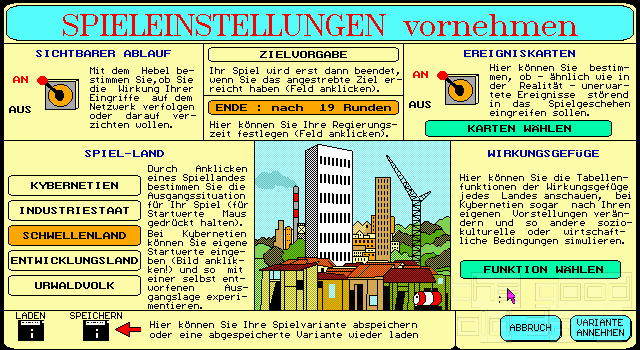