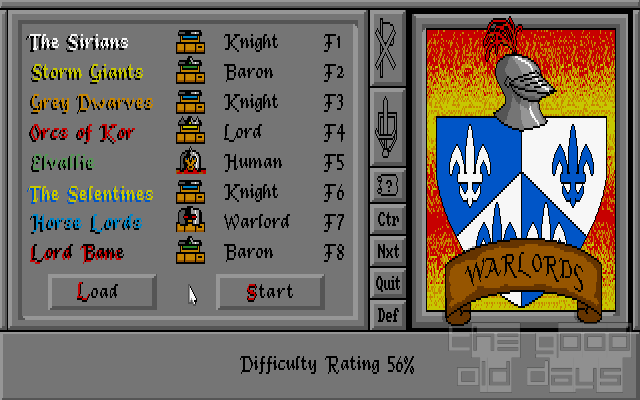 I must admit that Warlords is my favorite game. Very simple, but still providing for countles hours of playing. The plot is very simple. Without any intro, you select a nation, set the toughness of other nations and start to play. You start with one castle which produces an army every once in a while and a hero. This hero can either lead an army, or simply wander around and search old ruins and libraries. In return, he is either slain, or finds special objects, gold, or mystical creatures as allies.

The economy of the game is pretty simple, too. Each city produces a set amount of gold each turn. Each army consumes a set amount of gold each turn. You have to make sure that you always have some gold left, because if not, you would not be able to finish a turn without dissolving some armies. Mentioning the armies - there are lost of them, ranging from pikemen (a kind of militia), through heavy infantry, cavalary, wolfriders and giants, to such exotic beings as griffins, devils and dragons. The whole system of armies is very well balanced, increasing the joy of playing.

If you so far got the impression of a simple version of Heroes of Might and Magic, you are not far from truth. However, there are some important differences; some good and some bad. First, you can assemble army groups consisting of up to eight armies, but you don't have to lead it by a hero. As a consequence, heroes just rarely enter a fight, they are rather used as defenders of important castles. Second, you see the whole map immediately and observe all the enemy movements. I would really like to see here a continuous exploration of the map. Third, you can set the toughness of each opponent individually, creating a nice mix of environments and considerably adding to the variability of the gameplay. Fourth, the city building is limited to just strenghtening the defenses. Lastly, I am missing a score system in the game.

Updated: One more thing - a few weeks ago I've bought Warlords III, the Reign of Heroes (for $1.88 it was a great deal). Even there, the map of Illuria was all messed up. Not as badly as in the second part, but still. If you want a real challenge, get this game. The original map of Illuria is one of the best strategic maps ever created.

As mentioned before, one of the strengths of the game is its great variability. So, for example, at the easiest level the enemy does not search the ruins. At the harder one, the enemy searches them, but does not utilize its findings very well. On the hardest level, the enemy manages his empire very well, sending production to the border towns and is able to create a very strong army within several turns. However, because of natural borders, such as the sea and mountains and due to the large distances, it is also important to chose the right enemies to be strong or weak. For example, if you create two super-strong enemies at the other side of the continent, they will fight with each other and you would have to worry just about the weaklings surrounding you and win the game without even meeting the stong ones. The game is won when you occupy over a half of the castles (there are 80 castles in total). Then, other players offer you peace. If you refuse, they simply declare war on you and you'll have to destroy them all.

Overall, this is one of the most entertaining strategy games around. Even though it has just one map, it is extremely well balanced and offers plenty of different skill levels. 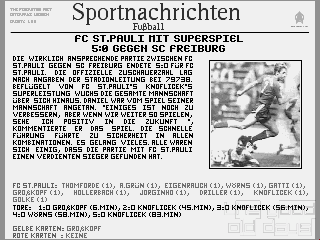