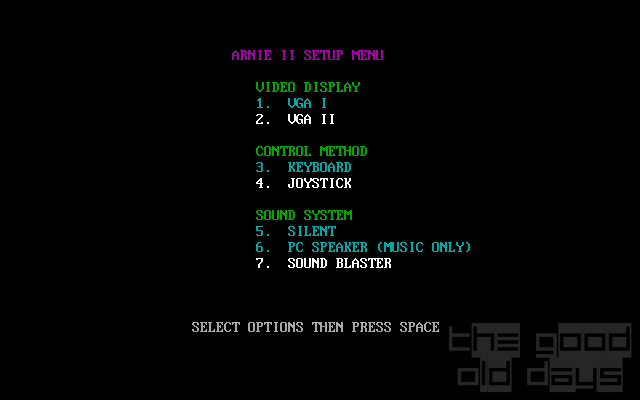 You are required to complete four separate missions. The four levels are: chemical weapons factory, airbase, naval base, and finally a jungle POW camp rescue mission.

There are different weapons to be found, but is a basically run around kill everyone and destroy what you can. They seem to just wander aimlessly around, but so many can gather on the screen that if they are not killed, then sheer weight of numbers will get you. The more static guards only face in one position so it is possible to get behind them in order to kill them. In the Arnie 2 setup menu that appears at the start, it is possible to configure the game to be playable with the keyboard, or a joystick (see screenshot).The controls are fairly simple, with a joystick you have normal directions and button 1 to fire your gun and hold fire longer to throw a grenade. Button 2 is to change the weapon that you use, depending on what weapons you have picked up on your travels.

The graphics are good and every thing is clearly definable.

The sound is what you would expect, grunts from the enemy when shot, explosions etc. All sounds in the game add to the atmosphere.

This game can be played in Windows (tested on XP), but there is no sound. Both DosBox and VDMS run this game perfectly.

This game is what I would categorize this game as a coffee break game (spending between 15 minutes and 1.5 hours playing it). This does not make the game any less enjoyable I will keep this on my computer for a quick blast now and then. 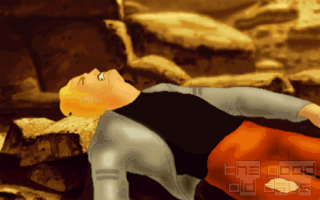