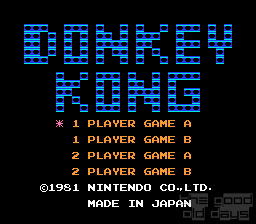 Donkey Kong is the signature game of NES. While originally developed as an arcade game by Nintendo and later ported to every single console available at that time, NES has been the flagship product of Nintendo, and so it's only natural that it was here that the game was most visible. This game not only started the most successful game franchise of all times, it also transformed a 90-years old game cards company into an electronic entertainment behemoth and in the process set one of the most important legal precedents for the gaming industry.

The story of the game begins in 1980, when Nintendo created one of the worst games of all times, Radarscope. To fix the game and make it playable, the company, in perhaps the boldest move ever, hired Shigeru Miyamoto, who was in his mid twenties. Shigeru grew up without a TV, graduated with an Industrial Arts degree, and his only valid credential was that he was regularly sneaking out from school to play arcade games. He threw out Radar scope and instead devised something simple, yet extremely addictive, Donkey Kong.

In the game, a monstrous gorilla kidnaps Mario's girlfriend and throws barrels at him, as he tries to climb up and save her. Altogether, there are four levels with growing difficulty. After the first level, puzzles are added, and the last level is one single action puzzle - you'll have to destroy support beams to have the gorilla to fall down, while dodging everything it throws at you. The game is all you can wish from a game: very simple, very addictive, hard but not frustrating and fast enough to finish it in few short minutes. The game is a work of pure genius, and the star of modern arcade gaming.

Donkey Kong has a huge historical value as well. Not only it established Nintendo as the leading force in electronic gaming, it also introduced you to Mario, which by now is one of the most recognized game characters ever. In addition, the game set a legal precedent when Universal Studios sued Nintendo for copyright infringement on its 1929 movie King Kong. Universal lost the suit on the grounds that its copyright expired and the up-and-coming Nintendo proved that a fledging company could successfully defend itself against a corporate giant. This ruling has enabled many other gaming companies to create products based on popular books and other works of art. All in all, Donkey Kong is not only one of the most entertaining games, it is also one of the most important games that shaped the gaming industry in the early 1980s.