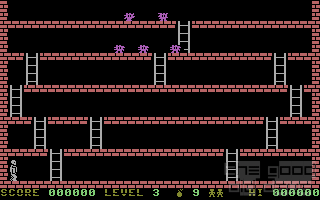 Don't worry, this is not a cheesy game revolving around a horse and an annoying child (I'm watching too much TV). This Fury is a Lode Runner version with a small twist. Instead of searching for treasure, the player is put in the role of one of the few survivors of an atomic war. Like the others, he lives underground to avoid death from radiation. However, there are also evil mutants in these caverns who must be destroyed (it's “us or them” apparently). So the objective is not getting rich, but killing the mutants.

The basic level layout is the same as in Lode Runner, though. There are six floors which are connected by (seemingly randomly placed) ladders. The player starts in the bottom left corner, the mutants (who look like gears rolling around) at the top. Contact with them results in instant loss of one of the player's five lives. There is no direct way of killing them, but they can't survive long falls (unlike the very tough player). So the player uses his dynamite to blow holes into the floor which the stupid mutants will walk right into.

The catch is that the mutants get more resistant in each level. The first ones are killed by a single hole, the second bunch can survive that. They need to be lured into a trap which is two stories deep. And so on. After five levels, the number of mutants is increased and it all begins again.

The dynamite supply is limited, of course, so there's always the question of where and when to use it. In addition, the player can repair holes in the floor again. This is very useful to get across holes after an untimely death, for example. Repair equipment is limited, too, of course.

What's nice about Fury is that it stresses strategy over action. Without a proper plan, there is hardly any chance of winning even one of the first levels and once there is more than one mutant to take care of, it's hopeless. The levels are small, so nobody can get lost and the options are limited - so it's never too complicated.

The random placement of ladders can sometimes lead to unwinnable situations, on the other hand. If the mutants can get down to the bottom floor more quickly than the player can reach the first ladder, for example, there's no way to escape an inevitable death. This can get quite frustrating, but it doesn't happen too often.

In the end, this is just a regular clone. Although it changes the objective a bit and in spite of memories of playing this game for endless hours (one of the seven games I had for the Plus/4 in the 80s), there's not much special about it. Very playable, but doesn't stick out from the crowd. 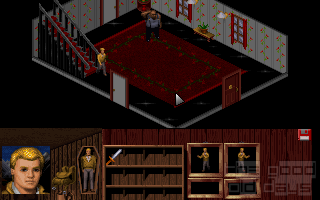