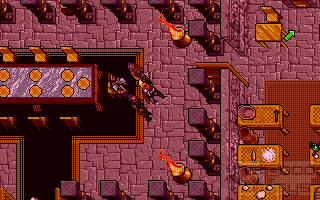 A few months after destroying the black gate the Avatar is sent to catch the leader of the conspiracy, who had fled to a lost land known as the Serpent Isle.

Basically the game system is the same as in the first part, but with some improvements. Mainly better graphics, noticed easily when equipping your characters and some hotkeys. But there is a big weakness added, linearity.

This is the first Ultima marked by EA and its pressures. The plot starts well, and develops in a good story about and ancient religion, maniquean at first sight but which becomes deeper as you find more about them, based in order and chaos. Neither is good or bad, as with balance both, joined, walk through the right path. Sadly as it advances something feels missing, there aren't big plot holes, just something seems to not be correct. And a few times it is obvious that part of the plot has been cut for quickening things, like the variable small limit of the party size (through which I crashed the game, try creating automatons as soon as you can); or with the three banes and the three artefacts hidden in temples and supposedly to find each of them, even thought they hid in the same place, a castle where the influence of the banes mixes awkwardly with the ghost of it's king.

But the linearity is the most noticeable problem, contrary to the previous ones this time you can not go where you wish when you want. As you advance more places are, slowly, opened for you. There isn't even the possibility of using a ship, to avoid travelling too freely.

Another lack is in the prepared, and acted by your characters, scenes. For first time the Avatar talks by himself, putting words in your mouth, the contrary of what makes the dialogs immersive. But apart from that those scenes aren't bad, as they make the game more alive in a different way, it looks as if you had an interactive theatre. NPCs already act and move according to their lives, but this makes it feel as if they do more things than their routines, and gives a bit of personality.

Luckily the story stays as the main point, and the game mechanics simple and easy to use. As usual the game revolves around philosophy and keeps avoiding being stupid, and this time they play with prophecies, obscure prophecies that only have a meaning when the prediction have already happened. Also, less noticeable than before, there are voices used again, this time for the three demi-gods, the great serpents. Good acting, but not as good nor original use as the inner voice of the first part.

Also, this one, as the first part, has got an expansion, “The Silver Seed”. Installing it you will receive an ancient talisman which will allow you to go back in time to the war of unbalance that destroyed the ophidian civilization. Well, just to an underground fortress of that time, and to three dungeons, being one of them an interesting labyrinth. Apart from adventures and a bit of story, you can get some artifacts, the most noticeables the keyring, used through a hot key and saving you from exploring around your bag filled with keys; and the ring of reagents, that allows you casting spells withouth them, it may sound as an unbalancing item, but remember this is the fifth game since the introduction of this kind of magic. And adittionally, there are a few gifts from the pressure and deadlines that make it confusing to know if you really have travelled to the past or not. 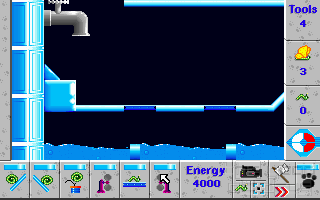