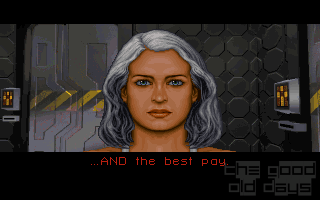 Right. What can I write about such an immensely popular game which hasn't already been said. Obviously not much. Also, what should I describe it for – everybody already knows it! Then again, maybe not really everybody. So, a brief introduction.

In Privateer, you take over the role of a (choke) privateer based in the Gemini sector of the Wing Commander universe. This isn't exactly frontier (although one outer edge does go towards Kilrathi space), which means compared to the 'main line' Wing Commander games, everything is a little calmer.

In fact, there isn't even the branching, but still fixed scheme of flying mission after mission. Instead, Privateer tries to go along the lines of Elite: You can freely fly around and earn money whichever way you want. For instance, you can trade. Buy goods on one planet and sell them on another. For that, there's a rough scheme of planetary classes: agricultural planets have a cheap surplus of food, which, in turn, is desperately asked for at mining planets. Of course, there are many more goods, and not everything is as obvious as this example.

Then, there are also missions. These have a wide range: the Merchant Guild might ask you to transport something or escort one of their members while the Mercenary Guild might offer you money for patrolling a sector or killing some pirates. Speaking of pirates, you're also free to go their way, too – smuggling illegal drugs can be highly profitable, but harbours the risk of running into patrols, of course.

What is all that money for? You can buy better ships and upgrade them with new equipment. You're starting the game with a second-hand model which is hardly state-of-art anymore. Even new guns, cargo space upgrades and such can only take it that far. For a truly safe passage through space, there are three civilian crafts (remember, you're not with the military in this game) you can buy on the free market: the Orion (described as 'a tank' in the manual), the Galaxy (a large merchant ship) and the Centurion (a medium fighter). These stock models can then be equipped with lots of different options to accomodate the player's wishes.

If all that is too much freedom, there's a story in the game, too. It can be triggered at any time by visiting the right planet / person, and it involves a strange alien artifact which you come by. Basically, the story just takes you from one person who gives you pre-scripted missions to the next. Still, it's a nice change from the otherwise randomized tasks. Especially since some of the missions are a little more on the tricky side. Even after finishing this 'campaign', you can of course continue to play for as long as you like.

Privateer is very easy to get into. At the beginning, you're restricted to a single solar system which, as it turns out, is to your own advantage: It's a very calm environment with little hostility in which you can take first steps, try everything out and earn a little by trading. Once you decide to leave, things get tougher, but at least you'll have a little more experience then.

The trading also isn't that complex (see above), no need to write down long lists of available and asked for goods by hand. And while the flying does require quite a few additional keys even if you're using one of these monster joysticks, it's more on the action side than simulation, too. Speaking of realism, it's very low, of course. Spaceships can turn around on the spot, there are explosions (!) in space and all that. Again, this signifies it's meant for casual gamers, not hardcore players. Keeping that premise in mind, it's excellent.

It does a great job of creating a universe which is to some extent believable and 'alive'. You constantly meet other ships (not restricted to the types you can fly yourself) which are either merchants, mercenaries, militia, military, pirates, Kilrathi or 'Retros' (a religious sect who wants to abolish space travel completely – apparently by blasting everybody out of space). All these groups have different stances towards you, depending on how you treated them so far. If you're constantly killing pirates, they will attack you on sight, too. If you help them fight the milita, on the other hand, they'll be your friends. Also, you're meeting with lots of different characters which keep the story running and there are even a few unique planets which have their own 'faces'. Pure and simple fun.

What wasn't so much fun was the way the game was marketed. As usual for Origin at that time, the game was sold in different 'modules' which you had to buy seperately. First of all, there was the main game, of course. Then, there was the Speech Pack. Installing that, everything which was said in the game sound from your speakers. A little later, there was an expansion called Righteous Fire which containes a second campaign (revolving around the Retros). For a brief time, one could even read about plans for an SVGA upgrade, but that was dropped again. Especially the concept of a Speech Pack customers had to pay roughly another 20€ for was heavily critized – and rightly so. Charging extra for sound effects? Thankfully a business model which didn't make it.

nobleEightfold (2019-08-15):
Wing Commander: Privateer is one of the best games I have ever played! It's just so much fun to play, and it sucks you right in.
Mr Creosote (2006-11-11):
By the way, I stronly advise everyone to check out the remakes in the related links. Both are built on top of the free Vegastrike engine, so they have lots of things in common. 'Privateer Gemini Gold' aims at being an exact remake (with improved graphics), 'Privateer Remake' (ironically) adds lots of new things to the game, like the ability to fly pretty much every ship and an additional campaign. They're both available for Linux, MacOS and Windows.
Wandrell (2006-11-10):
Yes now that I look for it. The copy I played is of a friend and by now it's nearly forgotten by me, so I mixed up things.
Mr Creosote (2006-11-10):
Wasn't that one released by Microsoft?
Wandrell (2006-11-10):
I mixed names, I looked and the game was Freelancer, aparently originally designed by the same who designed Privateer. I couldn't play much because the bug, but even thought it looked fun you couldn't travel freely, to unlock passages to other places you had to finish some missions.
Mr Creosote (2006-11-09):
Privateer: The Darkening? One of the worst disappointments I ever had. Virtually unplayable, I kept dying early on again and again, because unlike in the first part, the game immediately starts in the 'danger zone'. Also, once I got over this phase with lots of luck (read: restore saved game until a run gets through without meeting any pirates/whatever), I got to a point when I actually got quite good at fighting other ships. Only that suddenly, I found myself in an unending battle in which I killed something like 100 ships, but more kept coming, so I couldn't even run away. Horrible.
Wandrell (2006-11-09):
I have played another, newer, Privateer by EA, which owns Origin but gave the game that name probably to try to sell a bit more. It is fun, until you find it haves a game-stopping bug when you are ambushed, and have to be ambushed to continue playing and advance to the next place, and when a friend bought it (he had the same problem recently with another game by the way) there wasn't a patch for the problem.
Mr Creosote (2006-11-08):
Quote:
Right. What can I write about such an immensely popular game which hasn't already been said. Obviously not much. Also, what should I describe it for - everybody already knows it! Then again, maybe not really everybody. So, a brief introduction.