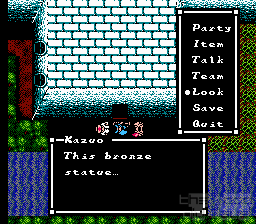 Mamiya Ichirou created a series of frescos that attracted many people to her abandoned and lost in the middle of the forest house. A place that obviously is damned and owned by her victim searching ghost.

Some people say this is the source of some well known horror games, without those exaggerations I say it is a nice horror themed game, for the NES.

The most curious point is that each character has a special skill, depending of their starting object, which at a difference of the ones you find around can't exchanged, they may cure bad conditions, make photographs or clean the dust, and each is necessary at certain parts of the game to keep advancing.

But this doesn't force you to reload or restart each time you suffer a casualty, something that happens when one of them loses all his or her hitpoints instead of falling unconscious as in other japanese games. There is a bunch of other tools to be found, some may give you a new possibility, like the boards for covering holes, the gloves for moving through thorny bushes, or the mallet for breaking stones; but others serve as a substitution of a character.

Sounds good, but there are two things avoiding you from transforming a party member into a machine prepared for every situation, each can carry three objects and they have to be divided in two groups, as you start with five people and each party is formed by three of them.

Exploring a haunted house finding ways to open the path, avoiding the traps and kidnapping ghosts, may sound nice and entertaining, so they added the main feature of any RPG of their country, aleatory fights.

They may be easy, and some objects may used against certain enemies to quicken the things and make the thing less tedious, but it is basically walking, stopping and slowly selecting attacking (with praying being the game's version of magic) until one of the two lose and then walking a little before yet another fight.

Anyway the battles tend to be easy, and you may even call the other party, which means switching to it and moving to the place, to help in the worst possibilities. And the objective is finding the frescos, making a photo of them and getting a clue of what to do next, which means exploration and simple but fun puzzles.

Wandrell:
As others can have the same doubt, I thinks that's a good idea.
Mr Creosote:
Right, I think I understood it now. So what about "Japanese, English (unofficial)"?
Wandrell:
Well, because officially there isn't an english version, if the game were to be republished, for example through the old game buying channel of the Wii, it will be in japanese more than probably, and if you look for the original cartridge it can be only found in that language, so the game is in that language even thought you can get a translation.
Mr Creosote:
I thought that much, but the real question is why it doesn't say 'English' in the language field in spite of an English version obviously being available.
Wandrell:
I played a translated rom, the only way of playing it withouth knowing the language. It's a common thing in emulation, and I other console games I expect to review will probably be of the same kind, as not always the good or interesting games where published broadly.
Mr Creosote:
Why does it list the game language as Japanese when the words on the screenshots are English?
Wandrell:
Feel free to share anything about Sweet Home (1989) here!
[Reply] 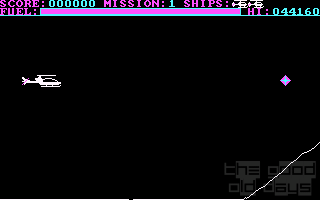