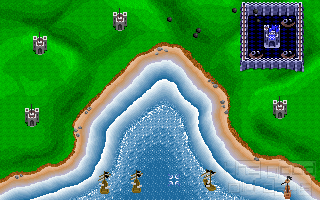 As an adaptation from an arcade, Rampart is a simple game, a simple, fun and hard game in which you will build the castle walls inside which will be placed the cannons to fight back an invading float.

Choose difficulty, being each a different section of the coastline; choose a starting position and place the initial cannons. Depending of the control you have selected among mouse, keyboard or joystick, you will have problems building the castle or shooting the cannons, and they both have the same importance as after the attacks destroyed walls should to be rebuilt or you will lose.

If the controls were not enough the pieces for repairing come in random shapes, try filling a bunch of one block holes without losing terrain or wasting the big blocks. But, if you are skilled and lucky enough, in the seconds given for that you will conquer terrain closing it among your walls, and maybe even a new castle. Keep doing that, and earning points, for getting more and better cannons.

But your enemies also improve, and come in bigger waves each time you defeat them, along with the ones left intact or damaged. There you will have also just seconds to shoot back, and it should be paid attention to these shots, as the cannonballs are sent in a parabola you should mark where the ship will be, and not where it is now.

Of course they not only resist a few shots, but also have cannons, and you have no way of directly stopping them. So be fast and sharp, or you will end losing quickly like me.

There is also multiplayer mode, apparently for fighting against up to two other players but that I didn't try. If it were cooperative things would be better, as the game is hard, too hard I would say, it is easy to understand it in the original, as these machines demand all your coins, but in a computer version it can be frustrating, but still fun for sporadic play. 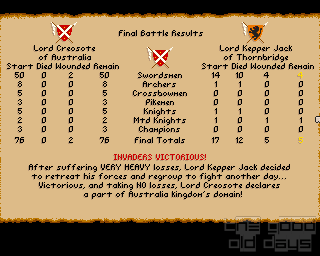