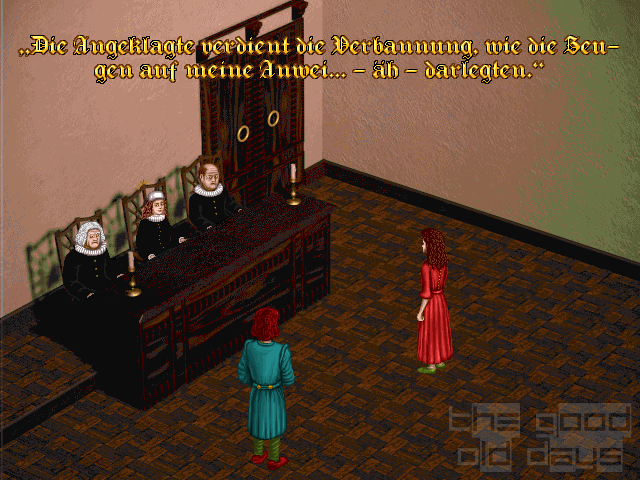 Money and political power are often closely related. The family referenced in the title is one of the best known historical examples of this phenomenon. The members of that family don't actually appear in the game, though. It takes place a few levels below that instead. On a regional level, i.e. a member state of the former 'Holy Roman Empire', the player tries to gain political influence - just like the big idols. 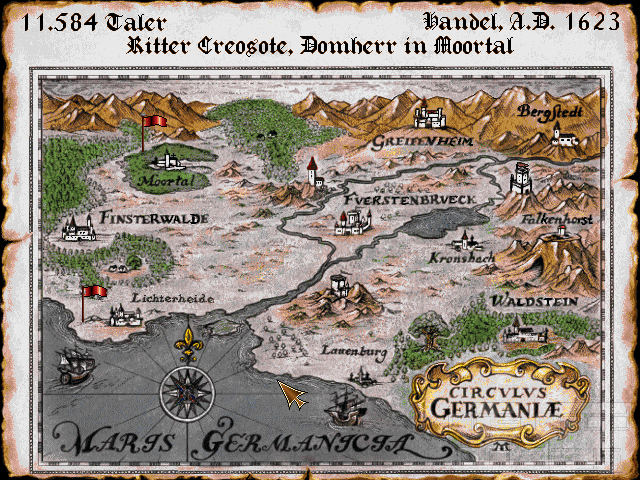 But let's start from the beginning. The competitors don't have more than a simple cart and a few Talers of money. It's the short-term goal to increase the latter by the means of trading. This trading follows well-known formulas: Produce goods in one city, transport it to another and sell it there for a profit. The transport is done by different means, like the mentioned carts or anything up to balloons. In the cities, sufficient storage capacity has to be available.

Many games stop here already. Shuffling goods back and forth with all its micromanagement makes the trading empire difficult to keep track of later, of course, and this reduces fun significantly. Die Fugger 2 circumvents this problem. The details of the trading can be committed by hired directors who take over the daily work in a city in exchange of a margin of the profits. The player just has to take care of assigning an overall budget then.

The player still has more than enough to do in relation to the political career. 'Mittelland' (as the game's 'world' is called) is divided into three counties of which each consists of several cities. Both worldly and churchly jobs are available on all three levels, and they're often up for taking. At the start of the game, you'll usually be happy with the title of a councilman, priest or mayor, but higher profits ask for something higher. What about the job of a chief financial advisor of the county or bishop? Finally, it gets really interesting for those aspiring to be Inquisitor, Chancellor or even Regent.

All these titles are decided about 'on demand', i.e. if the job has become vacant by death, resignation or dismissal of the former occupant. How the fitting cadidate is chosen is clearly regulated. Mayors are elected by the three Councilmen of the city, for example, and those are chosen by the three members of the senate (judge, treasurer, builder). The mayor can, in return, appoint the latter three. To be elected / chosen, you have to make sure the responsible persons have a high sympathy for you. A little 'donation' could help tremendously, for example...

Apart from waiting, there are other ways to free a desired position. For example, you can hire spies to collect compromising material about the one sitting on the chair you want, and if this material then finds its way to the desk of the respective superior, you might get your chance sooner than you thought. Alternatively, you can sue the person - one of the possible sentences is dismissal.

Each job gives you certain privileges. A judge can decide whether someone is guilty or not guilty, for example, an Archbishop can cause wonders to happen and a Secretary of Justice can simply change the laws of the country according to his personal wims. Others give you a strategic advantage - as Inquisitor, you can pretty much get everybody out of his job without any problems. 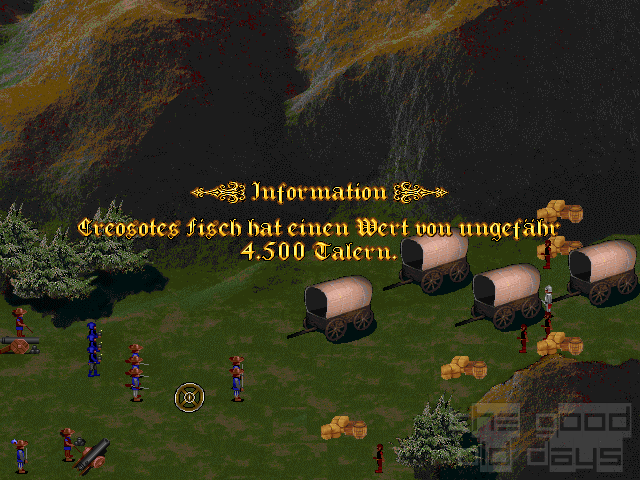 Additionally, there is a small military component built into the game. It's an open secret that there are a few brigand camps in the country. If you get control over one of these, you can try to intercept and steal the transports of your competitors. The soldiers stationed in the castles are standing on the other side of the law. Battles are fought in real time with the option to pause and give new orders. In spite of a number of orders being available, this part of the game remains just a minor footnote.

Die Fugger 2 can be seen as a pure multiplayer game with training mode. Single players don't have to turn away from it immediately, but many functions don't make much sense this way (why should you want to sabotage an anonymous AI player, for example?), and the political career doesn't serve much of a purpose, either. With more human players, this is very different, of course - the competition elevates the game to new heights.

Another good idea is that there is another game mode than the normal 'infinite' one (which, in fact, is limited, too - from a certain year on, no children are born anymore, dooming every dynasty to a foreseeable 'game over'). That mode includes fixed goals. Each player picks a card (in reality, not in the game) which describes his personal mission. These missions are split into three levels of difficulty (setting the rough time required to finish the game). A mission could be about getting a certain job or title, for example, or about earning a certain amount of money and private property. By entering a listed code, the game knows what the exact goal is, but no other player is aware of what his competitor is up to exactly.

Reducing the game to a single digit rating isn't a simple task. Playing is together with a few other motivated players, it's a lot of fun - a well-deserved '5'. The 'hot seat' mode is the only option for that, though, you can't play over a network / the Internet. Playing alone, it's just average in spite of nice options and its low learning curve. So deduct a couple of points for that. Those few who have read all of this know what it's supposed to mean, and everybody else... bad luck.

larata:
i love it
Mr Creosote:
Feel free to share anything about Die Fugger 2 (1996) here!
[Reply]