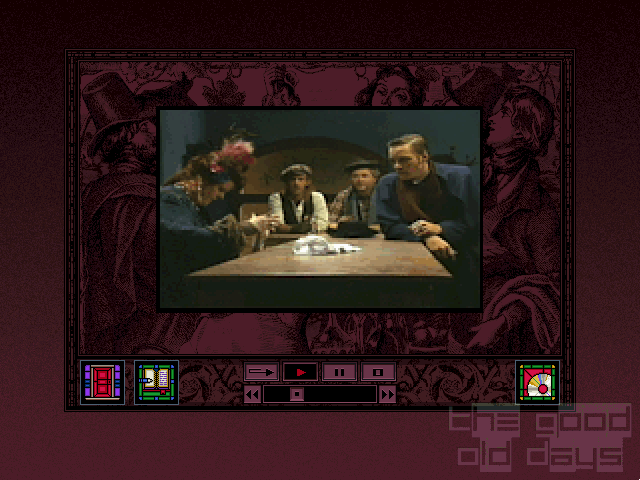 Ten years have passed since Dracula was killed. Alexander Morris, brother of Quincey Morris (a victim of the chase after the vampire), has come to London. His brother's connections make it easy for him to get into the society: he's invited into the illustrious Hades Club.

Not all is well, though. The strange death of Andrew Bowen, the father of Alexander's fiance Annisette, casts a first shadow. Quincey's death is still a mystery to Alexander anyway, and pretty soon, even stranger things are starting to happen. The inevitable conclusion: Dracula has returned, and he's after Annisette.

Dracula Unleashed is Icom's last game. Unsurprisingly, it uses a similar system as the earlier Sherlock Holmes: Consulting Detective series: the player decides to go one of the predefined locations and there, a video is displayed. This video might contain clues, provide you with a new item or it may just be a maid telling you nobody's at home at the moment (which usually means you're on the wrong track). Solving the game is a matter of triggering the correct scenes in the correct order.

This is where this game strays from the detective's already. There's a clock ticking away with every encounter, and this isn't just important for the final rating of the player's performance. Visiting the same place at different times of the day will show different scenes. Missing a crucial one effectively ends the game. Just that this isn't always noticable immediately. It might also result in a vampire killing the protagonist off a full day later.

That can lead to quite some frustration, of course. Most of the time, the player is forced to do a lot of backtracking, saving a game only to load again after trial and error didn't work once again. On the other hand, there are surprisingly subtle hints about what to do next available in the videos many times.

What's nice is the inventory management. You never have to search for pixel-sized items lying around somewhere, but you get what you need by being in the right place at the right time, again - people give you items or you're picking something up automatically. Visiting a place later, you can sometimes influence the scene by holding this new item in hand. Simple example: you're going vampire hunting at night. If you just visit the tombs, you'll be food sooner than you think. If you carry a stake, on the other hand, you might keep the upper hand.

Acting is the weakest link of many of such games. Fortunately, Dracula Unleashed is quite adequate in this respect. No award-winning performances, but certainly up to the level of certain Hammer regulars. Speaking of Hammer, it's interesting that this game is more faithful to the source material than any Dracula movie I've ever watched in my life (I've watched countless ones). It doesn't even claim to be telling the original story, but the short synopsis we get in the middle of the game is quite close and many of the novel's characters (Dr van Helsing, the Harkers, Dr Seward - even Quincey Morris whom I've never seen mentioned in a movie version) make appearances or even play central roles.

On the whole, there isn't much negative to say about this game. Sure, it suffers from the inherent flaws of the genre: little interactivity, linearity and some really annoying scenes (too many maids). On the positive side, it has a strictly limited number of locations (unlike the Sherlock Holmes games), a nice atmospheric storyline and good production values. So, this is probably as good as 'Interactive Movies' can get. Don't expect too much gameplay or too much of a challenge, and you might be positively surprised.

Thanks to catness for providing the game!