The Shadow of the Third Moon
for Amiga (AGA) 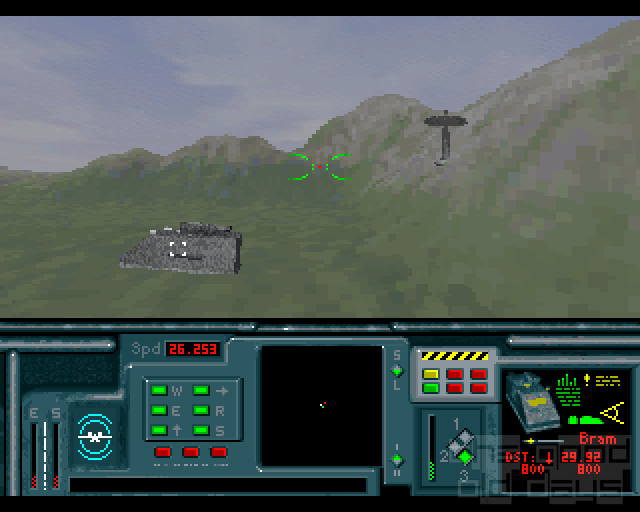 Mobygames isn't omniscient. There. I've said it. Heresy? Then show me where they cover this game (ok, ok, I'm aware this might change, I'm refering to the time of writing, of course). Yet, it obviously exists.

Now, to cut the contributors there some slack, it is an obscure one. Released in 1998, years after Commodore's bancruptcy and the resulting elimination of the Amiga as a serious market force. Many games released for that platform at that time were either sloppy ports of old titles from other systems or third-rate imitations of smash hits (again from other systems). Good thing 'many' isn't 'all'.

Actually, it's an almost ironic way to end this last paragraph, because The Shadow of the Third Moon immediately reminds the player of Comanche, released a few years earlier on IBM computers. Not exactly original, either. The key point where it deviates from the definition given above is 'third-rate'. It's a good game.

For those who haven't played Comanche, a short description. The player controls an aircraft (instead of a helicopter, it's a futuristic drone which has the ability to hover as well as fly forward and backwards) equipped with a weapon arsenal (choosable for each mission) which is sent out to fulfill military missions. Usually, they're about committing some sort of attack, like blasting other aircrafts out of the sky or ambushing a stationary camp.

While the first few missions are easy, the difficulty is increasing gradually, making open attacks less and less worthwhile. Instead, the right strategy, like from where to attack, whom to hit first and so on, gets more important.

The plane (for the lack of a better word) is controlled by a combination of mouse and keyboard. The former gives the direction and fires the weapons, the latter is used to control height, velocity and set all other things (radar range, target locking,...). Not quite up to the comparison with an analogue joystick, but working very well.

Graphically, TSOTTM uses a voxel engine. That's one of the ways to create the illusion of three dimensions on a two-dimensional screen. These days, vector graphics have conquered everything, but those require specialized hardware accellerators to compute in real time - unless there are only very few of them, which makes the images look blocky to the extreme. A less resource-hogging alternative is using simple bitmaps. The Wing Commander series used this technique quite successfully, as objects appear a lot more detailed than with simple polygons. The downside: Go near something, and all you see is two or three huge coloured blobs, shattering the illusion what you've been looking at was more than a mere wallpaper.

Enter voxels - pixels with a third dimension added to them. So you get the detail of bitmaps combined with the perspective of a third dimension. Of course, it's hardly a perfect method. Zooming in too much won't result in the total mess bitmaps produce, but you get the well-known staircase effect - some of the screenshots show this very well. However, screenshots (still images) can't really do voxels justice, because they show their strength in moving images. The sometimes painfully apparant lack of detail seen on screenshots is just blurred away when 'flying' through the canyons and over the lakes, resulting in an awesome visual experience. Something you have to see live to really appreciate it.

The game behind this is made good by a well-done learning curve, various weapons for different purposes and well-thought-out missions which don't rely too much on fast reflexes. With just a little more attention to detail (like for example the slightly confusing cockpit layout which provides too little information), TSOTTM would have rivalled Comanche for the genres crown. The way it is, it's a good second place.

Technical information: The game box lists an 68EC030 with 25 MHz and 4MB Fast RAM as minimum requirement (so a stock A1200 isn't enough). My 68030/50 (32 MB Fast RAM) plays it very smoothly. Of course, you need at least AGA (graphics cards are supported as well), OS3, a CD drive and hard drive to install it. The English graphics set has corrupt menu file which makes the game crash trying to load a saved game. Replace it with with the Italian menu file and it should work.