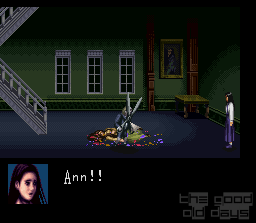 The Barrows family took to their mansion lost in the forest four young girls as adopted daughters. But quickly it is shown that something is not right, and one of them, Jeniffer, will have to find a way to somehow escape alive.

Possessed objects and bewildered animals will pose a danger for her, but not as big as the deformed dwarf that will suddenly appear from any unexpected place to stalk you, opening and closing the enormous scissors he uses for murdering as he slowly comes near you.

He is the best part of the game. Escaping from him, running and maybe falling while at it, thinking a way to outrun him or finding a place where to hide praying for him not to discover you is the biggest fun of the game.

You may try to fight back, getting near him will make the character portrait flicker, press quickly the B button and she will push him to a side, giving you a bit of time to run away, but consuming energy, something also lost when running. You may stay at one place until she kneels and rests, recovering some of it, but choose cautiously or the music will tell you that the murderer is again searching.

The puzzles and adventure part of the game may be a bit lacking, it is mainly a few easy ones along with key hunting, but it is short and has some things to avoid it from get boring fast. First some rooms and objects have random location, so each time you play the mansion is a bit different, and secondly the development is branched, so doing some things, or doing them in an order, will change part of the game, mainly what end you will finish with, and not all of them are at the end of the game.

Mood is well kept through the music, when there is some, and cutscenes along with events that serve just for that, for keeping the creepy mood. Open the water at the bathroom, maybe it is just water what flows, maybe blood; cross the corridors and the wind can suddenly open the window, or a pair of red eyes shine for an instant; look into the wrong place and maybe the body of one of your friends is inside.

Controls may be the lacking point, after all it uses a mouse like interface and not the SNES mouse, it doesn't even has a save option, although you can continue from where you died. But it is a good game, and something you would not expect in a Nintendo console, a game in the style of the typical slasher films. Unsurprisingly because of their politic, they decided to keep it in Japan, but even when the remake for Playstation was done, and even after publishing the second part for that same console in the rest of the world, it stayed in that country.