Machiavelli the Prince
for PC (DOS) 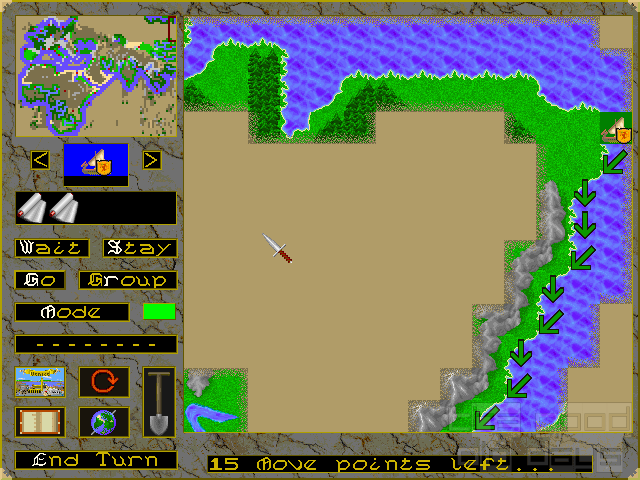 You, being a rich Venetian trader, do what you are best at, sending ships and caravans to commerce, buying at low prices for selling at higher ones wherever the best deals are and fight for the power against the other merchant families.

First you will need to explore, not only at the beginning your home city is all what is shown in the map but for knowing prices in other places, which can be accessed at any time through a window; finding relics, a thing that gets high bounties; being able to create long trade routes and locating the scarce, and so better for trading, goods it is necessary to continually travel around the world.

Also it serves for buying new ships (choosing from the fast or slow ones, each with a big and a small type) or caravans (made of donkeys or camels), as they can start at any known and open city, and for hiring mercenaries, used to conquer cities and then choosing which players are allowed to enter and getting rid of pirates.

A short route can get you a good deal of money each turn, and with the longest making much more money each time they reach a city it is easy becoming rich. But then doesn't end the game, the political part of it starts.

That money can be just spent in creating roads and buying protection for your traders, but there is also the possibility of using great quantities in building a manor and commissioning art, so you will get more popular. It helps a lot when bribing politicians or buying cardinals, as it makes easier getting a city rank such as commander of the army with the firsts, or even getting the control of the city, and also makes easier getting votes when choosing a new pope, mainly because each cardinal is a vote, so he can be a member of your family.

Starting crusades, excommunicating and getting money from indulgences or wasting the city treasury and using their armies for your own benefit. A great power that will need power for being kept, and for that you may hire criminals, who will murder and burn, incriminating if possible another family.

But some things can't be defeated, and plagues, storms, or the justice that considers treason being a bribed politician, can change all suddenly, making you fight again for it.

Note this is the remade version, not to confuse with the CD remake of this remake. I don't know how much differences there are with the original, apart from the name I barely noticed any.

Iklo:
How comes I've never heard of this game when I was young? Oh wait, perhaps someone mentioned it later on, but when it was too late. Anyway, I remember spending hundreds of hours playing these and management games. Pity I don't have that much time anymore.
Wandrell:
Feel free to share anything about Machiavelli the Prince (1995) here!
[Reply]