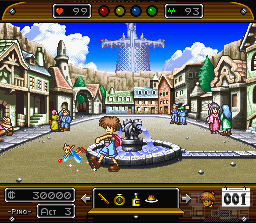 Based on Pinocchio and with a simple AI as main character, Wonder Project J consists on raising Pino, a robot that looks like a kid, to make him become human like.

All is done with a controller different to the usual one in a console game, as you use a mouse, on of those add-ons that only one or two more games made use of. It moves around a fairy robot that can carry objects, to put them into your inventory or getting them out of it, order Pino to move or stop, and scold (and doing it again, hit) or praise him.

Those two last actions are the ones you will make most use of, as teaching consists on getting his attention over an object and praising him each time he does what you wish until he learns how to use the thing, and scolding him if you wish him to change his behaviour.

There is a bunch of actions he can do, some item specific, like playing the trumpet, and some generic, such as eating the object he takes, whatever it is (which by the way changes his stats, always) or kicking it away.

His personality, and so what will he usually do with new items, how easily he will learn to use something and how well he uses the things depends on a series of stats that raise or decrease with Pino's actions, which means they change when using most of the objects. A sword will make him more violent and less caring for others, books will make him smarter and peaceful and climbing a rope will improve his legs strength and balance while making him less intelligent.

There is a good bunch of them with their own combination of stat changes, it can be hard sometimes keeping high all those you will need, but luckily you can buy drinks, food and drugs that can avoid much of the grinding.

The use of all this is making Pino pass tests. In each chapter there are some of them, you go there and leave him alone to see how well he does, usually being able to come back after more training if he does badly, making the game very lineal.

Wonder Project J is not as complex as you could expect from a game of this kind, and usually the artificial intelligence of Pino consists just in him starting to walk around, but there is something entertaining in it, and is also different to what you usually see outside computers. 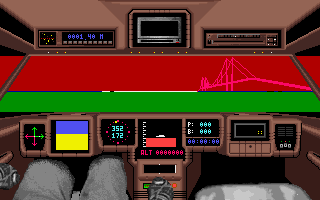