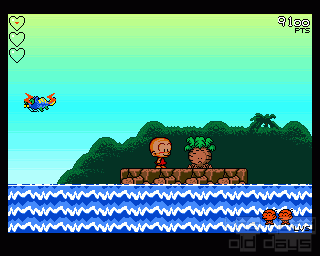 Conversions of console games to computers often go wrong. Translations of Japanese games just as often. With B.C. Kid, it went surprisingly smooth. It first appeared on the PC Engine and had (for 'western' tongues) a really strange name. The English version became 'Bonk'. Bonk? To make a long story short, the Amiga version got a better title when it was ported by the German company Factor 5 a few years later.

Basically, B.C. Kid is your typical Jump'n'Run hero. Evil forces have turned his prehistoric friends into monsters without free will, so the kid first has to get them out of evil's grip and then destroy the root itself. To achieve this, there are numerous levels with lots and lots of monsters to clear.

Following the genre convention, enemies are defeated by jumping on their heads (I really wonder who first came up with that and for what reason). At least there is a small variation to be found here: B.C. Kid can only distribute hits his his own head. If he lands on someone feet first, he's the one losing energy himself. So, it's diving down head first - don't try this at home, folks.

Another speciality of our hero is his eating habits. Normally, he's a vegetarian, and fruit refills his energy. If he does eat meat for a change, he turns into a raving madman, being able to jump further and taking a hit without even blinking an eye.

Crumbling platforms, hidden bonuses and lots of cute, childish background and foreground graphics - B.C. Kid has it all. Playability is there as well: Unlike many of its competitors, it's not full of unfair scenes. The latter alone already makes it a safe recommendation. What could certainly have been done better is change. Apart from the normal outside levels, there are underwater parts, but it could be more. No complaints about what's there, just about what's not.