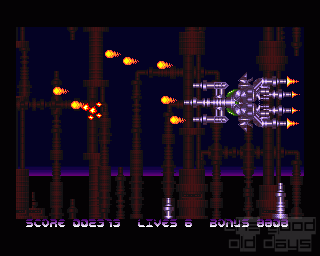 Ilyad is a game with a troubled past. It was scheduled for release in 1989, but for some reason, it never appeared in spite of being finished. A British magazine then dug it up and brought it to the public as a coverdisk in 1991. Another year later, it was finally released commercially at last (I doubt it was very successful; a certain other crewmember of this site owns what is probably one of the few boxed originals in existence). To get it over with right from the start: the three years show. The graphics virtually scream '80s', and they aren't even very spectacular for that time.

Anyway, Ilyad is a by-the-book vertical shooter. As usual, the player has to save the world. To beat the bad guys, he first has to fix the timestream which has been tampered with, and the required time-travelling device happens to be located in the evil headquarters. Blasting your way through that (level 1), you reach the time machine and you can now finish the following four levels in any order. After that interlude (actually, the main part of the game), a final 'evil headquarter' level waits.

The four 'intermediate' levels represent four different time zones: the earth's creation (vulcans and lava), prehistory (dinosaurs), antiquity (temples and statues) and middle ages (castles and catapults). Evil ships and drones are present in every level (their presence is the very reason you're going there, after all). The first and the last level are set in the present time of the game, i.e. the future from today's point of view.

Giving each level a different face is always a good idea. Ilyad only does a half-hearted attempt at this, though. Most of the enemies are always of the same few types (obviously, as they aren't part of the historical period), and so the changes are limited to the background scenery and a few stationary dangers.

On the whole, Ilyad is a little on the hard side of the difficulty scale. Various weapons are supposed to help. These can be picked up after blasting specific enemies. Some weapons are really crappy, unfortunately, and they make survival even harder. In particular, there is one weapon called 'Doolyx' (which is supposed to be good, because it fires three shots at once: one straight, and the other two at a 45° angle) which has such a low firing rate that you won't stand a chance anymore. In theory, you can learn which weapon it is currently floating around the screen, because they all have different icons, but that simply doesn't work. I challenge anyone to be able to read the blurry and tiny letter on the generic icon in the heat of battle!

Short overall length (why stop with the middle ages?) and complete lack of extra features to set it apart from the genre crowd make Ilyad a solid shooter with some wasted potential in the area of level design. Go try it if you're already through all the superior alternatives. 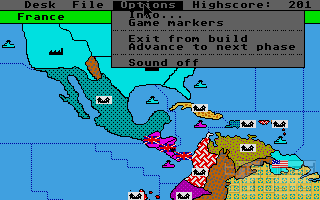