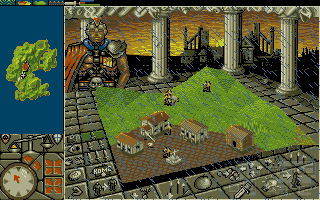 Bullfrog entered the market relatively late - their first own development was Populous in 1989, before, they had just done some conversions of existing games. Surprisingly enough, Peter Molyneux still managed to become a kind of 'cult-designer' even though the industrialization (and thus non-personification) of gaming was already dawning. Must have been because of the pure originality and quality of his design! Between the first two (and only worthy) parts of the famous first god-series, Molyneux designed a somewhat similar, but still again groundbreaking game: Powermonger.

The first thing you'll notice in comparison with Populous is the strikingly similar looks. Again, you're looking on a map from isometric point of view surrounded by control icons. The map looks less 'structured' though, it isn't built out of visible squares, but in a more realistic way.

Realistic is the key word indeed. Instead of a powerful god, you're 'only' in the position of a general leading his army. To be exact, the forgettable background story tells you're a king who has lost his land and now lands on new shores to conquer them. Anyway, the influence you have on your people is about as limited as in Populous. Only very indirectly, you can do anything for them at all. But these 'citizens' aren't the core of the game - the soldiers are! You can draft men from villages you control to your fighting force and this is what you have direct control over.

You can move your army around the map as you wish, stopping at friendly cities to restock food supplies and stopping at non-friendly cities to conquer them. This can be done in two ways: peacefully or violently. The first variant is likely to work with neutral, small villages whose population your army clearly outnumbers. Your men will just talk the people into joining you and a few moments later, you have won the reign over even more obedient servants. A big and proud city is less likely to react to this kind of approach though. In fact, they might even slaughter your (then defenseless) men! That is where the actual fighting comes into place. This usually goes quite quickly and fully automated, once the battle is on, you can't do much more than watch little sprites slaughter each other and hope your men will gain the upper hand. If your own character (who walks around on the map, too) dies, you have lost, so at least saving him, you still have a chance even after a disastrous defeat.

Cities aren't just breeding places for more soldiers and production places for food though. You can also invent and build weapons there to give your soldiers the advantage over seemingly unbeatable foes. That leads over to another interesting concept: the leaders. At the beginning, there is just your own alter ego watching over the map. If you take over a city in which another leader lives peacefully, he'll join your side. Then, you have two fully independent armies under your command. Logically, if you two are quite a long way away from each other, your commands will take some time to arrive via bird-express. One of these commands could (again) be attacking another city. But it could also be constructing the mentioned weapons. In this case, a leader is stationed in a city and the citizens, in addition to their usual food production, gather the material for whatever the general has come up with. This might be swords, bows or even boats and catapults - depending what 'mode' you've set the leader to. At the same time, the other army under the other general's command can of course continue the more direct conquest…

The aim in each level (there are many levels - months or even years will pass before you've completed the game!) is to get more than 2/3 of the population on your side. Then, you can 'retire' from this level and move on to the next. That means you don't necessarily have to defeat all other armies or conquer all cities. Strategic thinking what's useful and what's not is required there.

The first levels can easily be completed with a simple 'hit and run' tactic: attack one city, get the men and supplies from there, move on to the next city and so on. Soon enough, this will of course not work anymore. Then, the business component of the game comes into action. Robbing cities off all their food might not be so smart, because then, the people there will starve. Letting them prosper might be a more promising approach on the long term. Then, Powermonger gets more complex than any modern 'real time strategy' game: the 'factories' (cities) follow the principle of controlled growth (and its opposite: complete and utter exhaustion), the environment (coast, mountains) as well as the weather (!) play important roles.

Peter Molyneux once said in an interview Powermonger is the game he's least satisfied with (that was in 1994 though, so he couldn't take his newer crap into account

) and gave the reason that it was never really finished. The controls should have been completely different, all the icons were still only remainders from project status. It might be that Powermonger might have been better in some way or another, but the controls as they are work fine once you've understood the purpose of the icons. The game balance and learning curve are nearly perfect anyway, so that is nothing Mr Molyneux has to be ashamed of

Shortly after the release of the main game, Bullfrog released a data disk called Powermonger: World War 1 Edition (see last part of the screenshots). It is basically the same game, just set in WW1 instead of late antique (early middle ages?). The communication is handled by telephones/morse code, the weapons are rifles, cannons and tanks. Overall, a really nice different touch!

From today's point of view, Powermonger got a bit shuffled under in the awareness of the audience. Releasing it between the two Populous smash hits which received even more critical acclaim caused it to look worse than it actually is: like some kind of spin-off of the 'main series'. Objectively seen, that is far from the truth though: Populous may have founded the genre of god-games, but Powermonger broke ground in the area of 'conventional' real time strategy - maybe it was even more influential than its 'big brother' if you look at today's market, because how many real time games in which you control your armies directly can you see today as opposed to the indirect approach of Populous? Just that the strategy part got lost from Powermonger's concept over time... 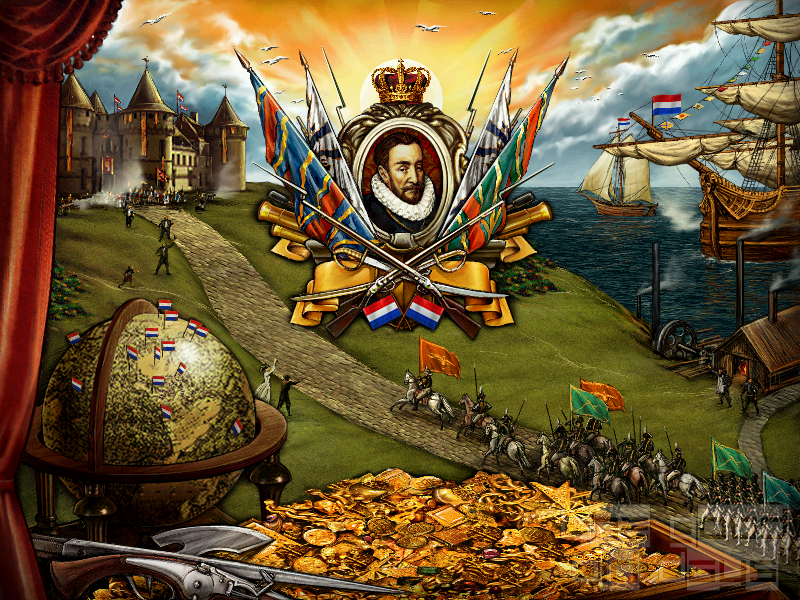