Back to Skool
for ZX Spectrum 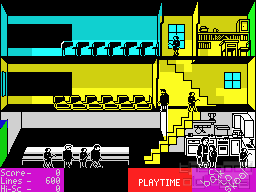 Last year, schoolboy Eric managed to steal his report card from the headmaster's safe. He has taken his time to forge a positive one. Now it's time to get it back into the safe.

A lot has happened on the school grounds over the holidays. It has been split in two sections: a boys school and a girls school (with a fence between them). The boys' building (the only part which could be seen in the prequel Skool Daze) has been expanded, too. There are now more classrooms, more offices, a new assembly hall and (perhaps the most useful innovation) a bathroom. The school has also bought a new safe to replace the old one. This one doesn't have a combination of numbers, but a simple lock. But where has the key been hidden?

Essentially a 'more of the same' sequel, Back to Skool manages to surpass its predecessor. This is mostly due to the increased complexity. The challenges are more varied: You don't just have to hit shields hanging on the walls, but the different 'sub steps' require different actions and skills. You even need various tools; apart from the catapult, you can use a water pistol, a stink bomb, a bike and a frog - if you can find / catch them.

At the same time, the game retains the basic qualities which made Skool Daze so good. The well-known characters, plus a few new ones, like the janitor and Haley, Eric's girlfriend (who can be 'pursuaded' to do some of his lines - now, at last, I understand the hype about getting a girlfriend!). The school bell chasing you back and forth all over the building. And lots of gratuitous violence, of course.

So, while this game obviously doesn't have the originality bonus anymore, it enhances the concept in a clever way to make the whole scenario more realistic. More importantly, it's also even more fun. As far as school simulations go, it doesn't get much better than this one. Hmmm, forget the first part of the last sentence.

Mr Creosote:
Feel free to share anything about Back to Skool (1985) here!
[Reply] 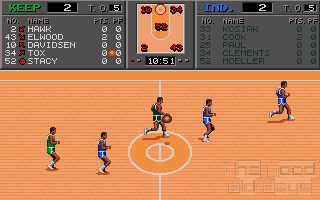