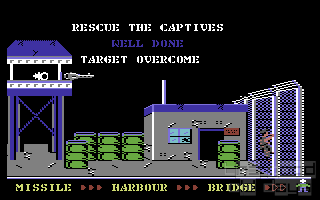 A (heavily deformed, if the title screen is to be believed) US elite soldier taking out a complete army on his own to free prisoners of war. Rambo? Yes, that's the general idea, just multiplied to even more bizarre levels of (non-) realism. Green Beret's gameplay is about as original as its setting. It's a standard sidescroller, with the player's sprite trying to reach the far right side of each level (and a final fight waiting there).

Armed with just a knife (for whatever reason; with the right player behind the joystick, he won't need more, after all), the 'hero' (you might also call him a mass murderer) has to face all the enemies which are heavily armed (firearms, grenades, you name it) and skilled martial artists (those karate guys are especially difficult to handle), they use helicopters, parachutes and order their dogs at you.

Not an easy task to survive. Sometimes, dead enemies drop their weapons enabling you to shoot a flame thrower a few times or throw a few grenades. That makes it a little easier (those weapons are powerful), but not by much. After four levels, you've won. Or not - you've just freed the first set of prisoners and the game starts over. Don't worry, though, it's very unlikely you'll ever get that far without cheating.

If there's anything to set Green Beret apart, it's the attractive graphics (especially the detailed, constantly changing backdrops) and the finely crafted, fluid animations. Even in crowded situations with many sprites on the screen at the same time, there aren't any slowdowns or choppy movements. The game's technical merits can't and won't be denied, and playability is alright, but in the end, it's nothing special. Worth your time if you're a fan of the genre. Not the sensation anymore it probably was in its day. 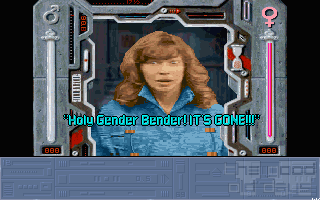