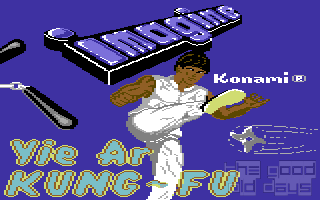 Aspiring youngster Oolong wants to become Grand Master of Kung-Fu. To achieve this, he has to defeat ten opponents (one after another, not all at the same time).

Nothing special so far, the mid-80s had their fair share of beat 'em ups (and many good ones). What sets Yie Ar Kung-Fu (I'll drop the capitalization seen on the title screen here) apart is the opponents. In the seminal hits of the time (Karate Champ and all), the player mostly faced faceless enemies who were identical to each other and also to the player. In Yie Ar (to shorten this even further), each opponent has his or her own sprite, his or her own moves and even his or her own weapon (!). 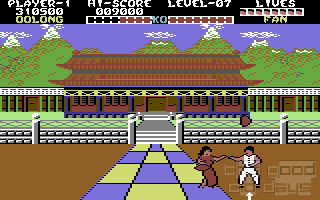 The enemies are all named according to their specialities, so it becomes obvious immediately. For example, there are 'Sword', 'Chain' and 'Pole'. The latter is an especially nasty chap, as his blow stuns you so that you'll be helpless against further blows from him. Meaning: you're beaten as soon as he hits you once, so keep moving. And this is what these differences are about: Each opponent requires the player to find and apply the right tactic to win against.

Another speciality of the game (compared to its contempories) is that it just goes on until one of the fighters is knocked out. It doesn't pause after a hit, but just goes on in 'real time'. Likewise, there's no referee evaluating the moves and awarding points - it's really just about beating the other person up.

All that makes Yie Ar a special game for its time, but a role-model from today's point of view. The predominant branch of fighting games of the mid-80s died out, while the style of this game prevailed. Younger gamers trying it out for the first time will probably be surprised how closely it matches all the things which made later games in the genre so immensely popular. So, in spite of rather mediocre graphics (at least the gameplay and smooth), this Yie Ar is always worth a look (or two or three or...). 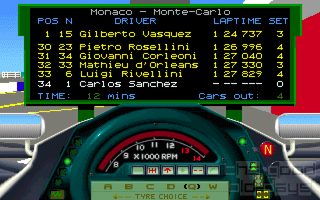