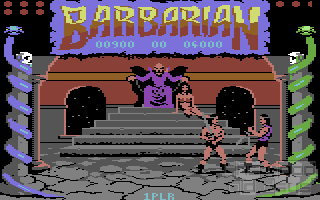 LostInSpace (21.10.2019):
What I really like about this game is it's advertisement in computer magazines at that time

Moebius (22.07.2014):
It was one of the best games on Spectrum, and it actually looked a bit better than C64 version. Although, lacking in colour but compensating with better detail, which, i believe, is of higher priority here. The gameplay is pretty good, all the moves are quite diverse, the graphics and animation are on top (for those times). BUT.. there's just one little disadvantage: absolutely no variety of opponents, but just one and the same, which if defeated becomes tougher, and this neverending battle never ceases, but just goes on and on. I think that's a great flaw and in a sense leaves the game incomplete or even makes a demo version out of it. However, it's still a masterpiece, and since the people back then weren't as spoiled as we are today, they considered it to be perfect.
[Antworten]