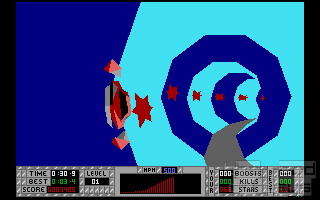 You've all gone through this: You see this amazing game, a technological marvel, a sensational experience. You buy the game, and then it turns out your own computer doesn't really seem to be up to it. These days, you'd just go out and buy a new video card or a faster processor, but in 1990, that just wasn't possible - because all hardware on the consumer market wouldn't have cut it in some cases. Cue S.T.U.N. Runner.

It is a futuristic racing game in which the player controls some sort of glider. You have to defeat the clock, i.e. reach the end of each course in a specified amount of time. Obstacles like other vehicles, curvy parts and narrow passages makes this a challenge. Ramps, occasional power-ups and your trusty laser gun (to blow away other vehicles) support you in your task.

What made the arcade version of S.T.U.N. Runner so impressive was the detailed and, most importantly, fast polygon graphics. Unfortunately, this is lost on all the existing computer ports. The 8 bit versions just look bad, and the 16 bit versions are slow. This ST port feels a little better than the abysmal Amiga version, but it's still slow. Too slow to provide a sense of velocity required for such a game.

However, let's not be too harsh with the game. There are some nice ideas, like for example the ability to drive on the walls of the rounded tunnels - using the basic laws of physics to your advantage as you can go faster if you're on the 'outer' side of a curve. Also, the time limits are generally just right. Time running out when you can already see the finishing line surprisingly enough doesn't lead to frustration, but motivation to try once again.

So, almost all the good things of the original are present in this version. Apart from one essential feature. That's a pity, but it's still good for a quick round. One of the few games which actually do beg for a decent remake. Anyone?