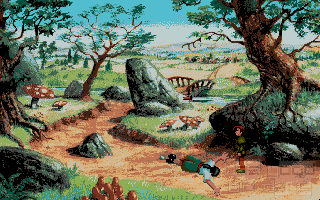 1992. Sierra had left the Amiga market (only to return silently later again, but that's another story), other companies tried to fill the gap. Core Design (these days known as the makers of horrible action games featuring big breasts) did it most successfully - they almost perfectly took Sierra's place with their Adventures! Not so much in serial output, but certainly concerning the quality of their products. Does that mean they made great classics with intriguing stories and witty puzzles which stood the test of time? Well, not exactly.

Curse of Enchantia is the company's first try at a Point & Click Adventure (correct me if I'm wrong). The whole setting and complexity of the story (or the lack of this) strongly reminds of King's Quest. Some normal boy called Brad finds himself teleported to an alternate dimension by some evil (?) witch, thrown into a dungeon and chained upside down to the wall. That, along with the motives of the witch and Brad's characterization, is perfectly ignored in the non-existent intro. The game just starts with your alter ego hanging on the wall, you're supposed to get the rest from the manual.

The second thing you'll notice (after the missing story) is the controls. As you desperately try to figure out why you're there and who are you, your cursor will touch the top or bottom end of the screen. A menu will pop up. This menu contains graphical icons which are supposed to represent certain actions your alter ego can take. To a seasoned Adventurer, they seem to be self-explaining.
But wait! Many of these icons don't immediately cause an action! They're just placeholders for a group of activities. Clicking on the hand for example will open yet another menu showing another list of possibilites - ranging from putting keys into keyholes and putting cards into slots (<sarcasm mode>really useful to distinguish between those two</sarcasm>) to throwing and giving things away.
On the whole, there are many verbs you can use. I'm always for variety, the over-usage of the verb 'use' in many Adventures annoys me sometimes. This system is no alternative though! It is not at all well thought out, many verbs aren't ever needed, some are virtually identical and last but not least, some are used in completely unfitting ways. Bad. Really confusing.

That is supported by the puzzles. The game is dominated by searching for invisible items lying behind rocks or in piles of identical-looking things. The second type of puzzle is giving items to 'people' (animals) in order to receive something else in exchange. Then there are the puzzles which have something to do with combinations of objects. Can these save the game? To make it short: no. Failing logic climbs up to new heights in this game! Almost all the solutions seem to come completely out of the blue, they are just completely random and not motivated by anything - either you'll only understand the 'logic' behind them when the scene is over (and ask yourself how you should have known in advance) or there isn't even a try at logic behind them (with the only possible explanation that this is certainly the strange physics of the alternate dimension or why does the thief turn into a sack of gold when he's hit with a sword?)!

To make matters even worse (i.e. to add to the player's confusion), there isn't a single line of dialogue in the game. Everything's done by pictures. To say if something the player tried worked or not, the cursor changes into 'thumb down' or 'thumb up' without the slightest explanation why something doesn't work. Looking at something, you will not get a description, but simply a flat, 'rejecting' hand in 99% of all cases! Conversing with other 'people', all you will get is bubbles with pictures trying to tell you the most basic and necessary information (a merchant saying what he'll exchange for what for example). Can you say 'moody'?

What saves Curse of Enchantia at least over the very first few minutes is the graphics. Almost all backgrounds are very beautifully drawn, from just this aspect, the game would be a masterpiece. If there wasn't the scrolling! The term 'scrolling' can't even be used in this case: instead of smooth shifting, the screen is abruptly advancing in steps of approximately 100 pixels (for comparison: the total width of the screen is 320 pixels), causing extreme pain to your eyes!

Fittingly, the game ends as it begins: completely without any explanation and also without any rewarding ending sequence. The lack of story elements and characters (blue/green bugs standing on the road for the pure purpose of preventing the player to advance don't count) is what makes Curse of Enchantia's status as Adventure even questionable to me! It feels more like a simple annumeration of puzzles. And a really bad one in addition! Core Design should be proud: in all aspects but one (the graphics aren't ugly and technically crappy), they emulated Sierra's style perfectly - a more suitable replacement is almost unthinkable!