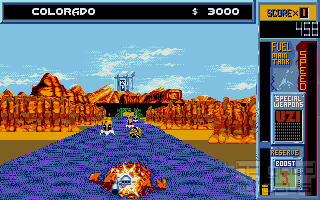 I never expected the job of a postman to be so exciting! A cool motor boat speeding down rivers and over the sea to deliver important packages (like for example the Britsh crown jewels) to their recipients. Avoiding terrorist ships, mines and floating logs, or blasting them if they are really in the way (I'm waiting for the day DHL starts doing that). All just to ensure speedy delivery (I'm waiting for the day DHL considers taking a go at that, too).

Actually, there is no time limit at all. Instead, the boat's motor is eating fuel like a black hole. Exploded boats conveniently drop fresh supply cans which can be picked up by driving over them. Likewise, the rivers are full of money bags which have the nasty habit of taking off into the air if you're too slow. Money can be spent after each mission to buy additional weapons (flame thrower, Uzi etc.).

It's not quite clear what the point of these weapons is as the standard gun is more than sufficient against the harmless enemies already. Fuel consumption, on the other hand, is so high that it turns into a huge problem to keep going at all. Using one of the rare boosts can help catapulting the boat over the next checkpoint sometimes, but in general, if you don't catch most of the cans, it's goodbye to one of your precious lives.

In spite of its attractive cover (especially the water graphics are really nice, but a ground texture would have helped to make it even more attractive), Hydra has few redeeming qualities. As mentioned before, all those weapons are rather pointless, and the levels are all pretty much the same, too. Not the disaster some claim it to be, but also not a huge hit standing out from the crowd.