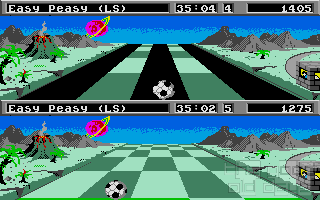 A football rolling along courses made of coloured tiles, trying to make it to the end before time runs out. The colour of the ground indicates different effects on the ball: yellow increases speed, green decreases it, white makes it bounce, magenta bounces it back and cyan switched left/right controls. Rolling into holes (black) makes the ball fall into the void of space... only to bounce up again a moment later (but at a loss of time).

The Atari ST is the only 16 bit home computer blessed with a port of this 8 bit classic. All the versions deviate drastically from each other, so some explanations even for those who have played the game on another system are in order. The one for the C64 seems to be the best known one, so I'll use that as a comparison.

There are three game modes: training, arcade and two player. The first lets you choose three levels to play, racing purely against the clock each time. The second adds another limitation: you're only allowed to make the ball bounce manually a few times, making it significantly harder. Last, but not least, you can play against another player using a split screen, using the rules of the second variant. There is no computer-controlled opponent, it has to be another human. This is a limitation compared to the C64 version which has a virtually unbeatable one (so the loss isn't so hard to take).

Graphically, this is the most attractive version of the game (no surprise there). At the same time, it plays quite a bit slower. Which is a definitive advantage, because it improves playability a lot. While certainly technically impressive, the extreme speed on the C64 makes obstacles appear within a split second without any chance for the player to react properly. While still challenging, this version is fairer.

One general problem with the concept is the way the reappearances of the ball from holes are handled. There are situations in which you can't avoid jumping into a hole right away again. For example, if there are just individual tiles which you're supposed to jump on consecutively, you just have to miss the first one, and you'll have no chance of getting back into the 'rythm'. This, however, is basically the only 'hole' (hehe) in the concept.

Trail Blazer once again proves that simple, basic and abstract ideas often make better games than sophisticated concepts close to reality. It's pure and innocent fun without much thinking - and fun is what we expect from computer games, isn't it? 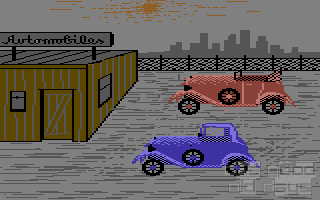