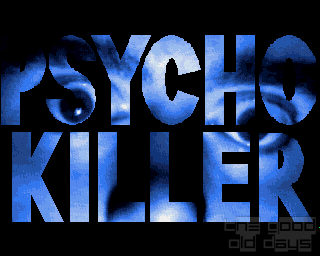 Games have disappeared into obscurity for the oddest reasons. Some faded away because of bad (or lack of) marketing. Some just came at the wrong time (e.g. when the genre they belonged to was already on the decline). Some just don't have the mass appeal, but became favourites in limited circles. And then there are games which are just crap. Like Psycho Killer.

This is an early CD-ROM title, released for the ill-fated CDTV system. The developers came up with the same idea to fill up the seemingly endless amount of storage space as so many other companies a few years later (when CD drives finally became mainstream): use full motion video and recorded speech.

First problem is that the technical quality is bad. It all starts with an intro. 'Intro' usually is a short form of 'introduction', i.e. we should get some information about what the game will be about from it. However, those blurry pictures (apparantely recorded at an extremely low framerate) make it hard to figure out what's supposedly going on. Tinting the pictures all in one colour might actually a good enough idea, but when it comes to lighting, everything goes down the drain again. Not too dark, but way too bright.

Anyway, as my brain tries to make sense of what I've seen, I gather the story probably is concerned with a woman (or a man with long hair) driving along a country road being stopped by some bloke. You happen to be at the same place, witnessing the maniac (?) chasing the person from the car across a field. Now you're supposed to help that person and stop the 'psycho killer' (the latter only derived from the game's title).

Gameplay isn't really any better. The 'interactive' parts consist of still pictures on which you can click around hoping you'll hit an important object. It's hard finding anything, because neither does the cursor indicate usable objects in any way, nor do the graphics make it obvious what's important and what's not. If you manage to hit an object by accident, you automatically commit the action the game has in store for that particular hotspot. Usually, that is examining the thing, but it can also be to use it or pick it up. Again, the bad picture quality makes things very tough and frustrating, as you hear lines like “I wish I'd renewed my membership” or “Not much use in the country” when clicking, but you can't figure out what that's supposed to mean, because you can't recognize what you've just clicked on. One of the 'things' is just a white spot and the other one a red brick. So what membership is he talking about and what isn't much use in the country?

You can walk around using arrows which appear to indicate which direction you can move to from one screen. Works well enough technically (one of the few things in this game). Basically, there is only very little to do, though. You just wander around aimlessly until you meet the killer, then the game suddenly expects you to click on exactly the right spot in the moving picture within one or two seconds. If you fail, you're dead, and you have to start again (no save function, so back to square one - gaaaah). Otherwise, there's more pointless clicking on the arrow keys until there's another 'encounter'. And if you actually have the patience to sit through all of it again after being killed a few times, you'll notice the game isn't even that long (still a vast understatement). Considering the really, really painfully bad prose you have to endure each time you die, it's highly unlikely you'll ever get as far as the ending.

Psycho Killer certainly is one of the worst games I ever had the misfortune of playing. It's not even the slightest bit impressive based on technical merits, as the production values are so low (for whatever reason, as not even 100MB are used on the CD, so there was still plenty of space left). And if you can't deliver decent gameplay, at least tell a thrilling story. But no, even that part is bad (Story? What story?). Psycho Killer has absolutely no redeeming qualities apart from its complete and utter badness. Try it for a quick laugh only, avoid like the plague otherwise. 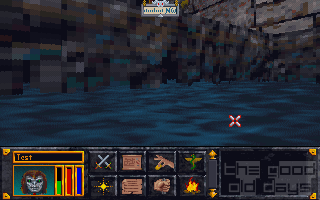