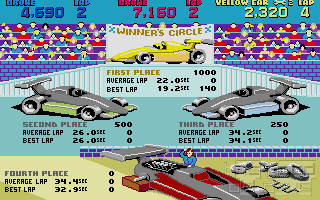 Finally - the classic when it comes to top-down racers. You'll find exactly the same elements as in the later imitations. Namely: Fast and simple racing round courses which stretch exactly across the screen and randomly appearing power-ups which can be picked up by driving over them. In this case, the latter consist of bonus points and wrenches. Wrenches can be used to tune your car (motor, tires, you name it) - another standard feature.

Since the gameplay is always so similar, it's the details of the execution which make a game good or bad. Graphically, this is the only computer version of Super Sprint which is an adaequat representation of the original. It's also fast, and the extras are (as described) all there. There are only eight courses on the whole, which isn't much, but those are well-done (with gates opening and closing, sometimes allowing for a shortcut, jumps, the obligatory water spots and so on) and the farther you get into the game, the more obstacles are placed on them, so it isn't always exactly the same course.

The game requires you to actually win a race to continue, not just being placed among the first two or three. On the other hand, it allows unlimited continues, so you can play indefinitely in theory. However, each time you don't become first, you lose all your car upgrades, which is a bit of a pity. A general problem with all these games occurs here, too, of course: the small cars can make it a little hard to control them accurately.

In the end, Super Sprint isn't anything special anymore from today's point of view. It's just mediocre, even if it set new standards at its time. The only thing still setting it apart is the three-player-mode. That can be great fun - at least if all drivers are roughly on the same skill level. For single players, there are better alternatives, but also many worse ones. 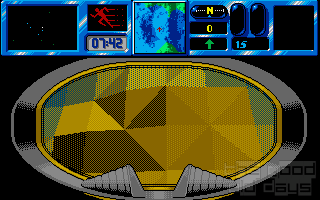