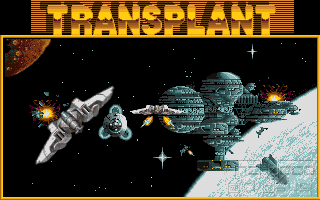 If there were an award for most distributed freeware game of the era before the Internet became all-encompassing, Transplant would be a serious contender. At a time when it just became viable to put floppy disks on magazine covers not just as a special, but on a regular bases, full version games – as opposed to tiny demo versions which might not even have been interactive in many cases – were in high demand. Preferably, of course, not the usual blips and blops crap.

Transplant filled this bill perfectly. The Asteroids clone is very competently made. The fragmenting large asteroids are quickly joined by enemy ships of many varieties, stationary space guns, missile launchers and even other types of asteroids. All of these existing in many different kinds which don't just distinguish themselves by their vivid graphics, but also their behaviour follows pre-defined patterns per model. So, for example, you get ships trying to ram you, but also others which will sneak up from behind, fire a single shot and then run away (often luring you into the arms of even more enemy ships).

The action becomes quite frantic through a simple graphical trick. Instead of the player's ship turning, the world around it does. That makes everything appear very fluid and dynamic while keeping the controls manageable, because the intuitive meanings of all directions are retained ('up' always means 'upwards'). Overview is nevertheless kept by virtue of a semi-transparent radar displayed around the ship which turns at the same rate.

The varied levels (due to the aforementioned variety of enemies) make for most of the game's appeal. Small things, like the score (awarded for speed and canny use of firepower) being used between levels to upgrade the ship in standard categories like shield or firepower, do the rest. Finally, the cooperative two-player mode conducted in split screen is the icing on the cake. 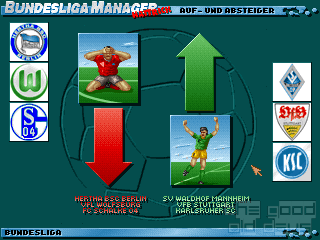