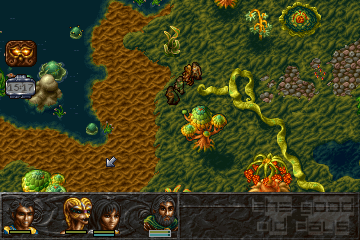 Today is the great day, today the Toronto arrives at its goal, a mineral rich planet where to start a colossal mining operation finishing a multimillionaire travel. Everything looks great, until an accident during leaves the exploration crew stranded on the deserted lifeless planet, to discover that it isn't a desert, and much less lifeless.

They also find an intelligent alien species, the iskai, anthropomorphic beings barely cat-like in appearance. But things get more surprising when they discover that magic exists here, and that humans with a celt society have been living in this world for centuries. An inhabited planet means that the mining operation should not start, risking otherwise to damage the planet, and so they embark in search of the Toronto.

This game has its own flavour, the graphics are great with many exotic designs and some weird ones, the world is a detailed one where you can get anything that is not nailed and find much about its background speaking to the people, and adding to this the plot is great.

Sadly, it is also very linear. You follow the road getting few sideways and less reasons for going back to places you have already visited. At least what you get to explore is fun and entertaining, mostly this are the dungeons, each with its own background well mixed with the world story. But all the isles are big enough, and good looking enough, to make a trip around just to see the place.

If you are looking for a reward for this, know that it usually serves just for getting a few fights, which as expected is an important part of the game that can become a nuisance.

Most of your enemies are animals, with a few supernatural beings and some mean people. The combat itself is turn based using a board where each turn you give an order to each character. You know, the usual: fighting, moving, fleeing, using objects, casting spells...

The last one is the only noticeably different, as the iskai magic (the less versatile human one is more typical) requires some special seeds along with mana. And when lacking mana you can sacrifice part of your life to power the spell.

Luckily fights are easy, well they are easy if you don't avoid many and raise your skills (used just for fighting and opening locks), so you can sit and dedicate yourself to the main point, advancing in the interesting story which even thought in base it is magic versus technology it is done much better than usual, transforming it into a fight between two ways of seeing the world, one of mathematical reason and one with a philosophy of possibilities that are just two sides of the same coin.

A good but short game, pretty short, which is probably the reason of the last part of the game, a pair of tediously long dungeons, so long and tedious that I ended having to use cheats if I didn't wish to expend days fighting my way.

For the collectors out there:

A pre-alpha 'dungeon routine' of Albion for the Amiga can be downloaded from Aminet.

This may have spoilers:

At the end of Albion you visit an underground city, which quickly becomes a dungeon. It's so long that the thing gets boring, requiring some days to finish it with many troubles. But after that you go back to the Toronto and again you get a loooong dungeon.

You get the impression that it is not going to end, and then throw you in a fight against a lot of very strong robots (and another one earlier versus a horde of weak ones if you didn't bring the correct character) where you have to kill the correct group to get a key card. That point felt like a kick in the balls and was where I decided to look for cheats, but luckily little after that you reach the end of the game.

Until that, the game is great, but the last part looks just as a cheap way of making the game longer.

Actually, Amberstar is an Atari ST original, and Ambermoon was meant to become one as well (it was the faltering ST market and also Thalion's own demise which prevented it to be released for that system).

Regarding your comment about the final dungeon, seemingly 'endless' ones can be found in the 'Amber' games as well - the developers seemed to like it that way.

Wandrell:
I didn't know Ambermoon was similar to Albion, and looking around internet surprised me. I had heard of these two games, but being for Amiga I didn't play them (one day I should use an Amiga emulator, but I have many things to do)
Mr Creosote:
In some ways, this game is overshadowed by its predecessors. Nowhere near as popular as Amberstar, not with the same 'cult' appeal as Ambermoon.
[Reply] 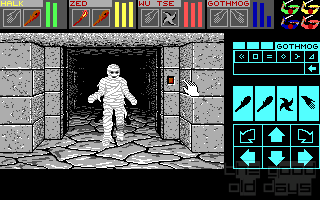