The Horde
for PC (DOS) 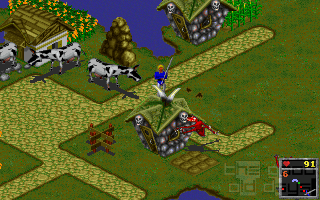 After saving the king from chocking to death his highness gives you a reward that greatly improves your life, a title of knight. Now you have the king's favour and with it the privilege of paying taxes and a fearsome enemy, the all-devouring horde.

This horde had disappeared years ago, yet you are so lucky that it comes back in your lands for consuming your crops, your animals and your people. So prepare to defend them, as they are the ones who give you money (or more exactly the things they grow are), and no money means no taxes paid, which will help you greatly to end in prison.

Staying as a knight then means building around the village putting fences and walls, buying cows, hiring (turret-like) mercenaries and placing traps. All spiced with a time limit and a bunch of interesting bits to make you pay attention to your lands.

Not only there are some secrets hidden around but each region suffers different problems: the desert needs water channels for having terrains where the people can build homes and crops, in the swamp you will have to plant as many trees as possible for the wet land is not good for your people and pretty good for the horde, and in the forest you will suffer as much as the fairies for each of tree or theirs you cut.

After this comes the action. Horns blow, the enemy comes from everywhere and you fight with your sword to stop its advance. Remember that you are not a great swordsman and attacking means spinning and beating anything around you. Spin too much and you will end dizzy at the monster's mercy.

In this section you can only do one thing, kill all the hordlings. Kill the fast ones, the huge slow ones, the sportsmen that hide on the trees, their wizards and whatever they send for you, before they do the only thing they live for: eating.

Then, once all has calmed, there is more to build and rebuild with the money the surviving crops and cows gave. But notice the changes, as after each of these turns the map increases, the trees grow and the terrain changes.

And remember to not expend all the money, for after each season the taxes have to be paid, and after each year with all the money not taken by the king you will be able to buy some neat gadgets.

Mr Creosote:
It should be noted that this game was made by the same people responsible for the original two Star Control games. It shows in its interesting quirkiness, i.e. the way it escapes the usual genre definitions.
Wandrell:
Feel free to share anything about The Horde (1993) here!
[Reply] 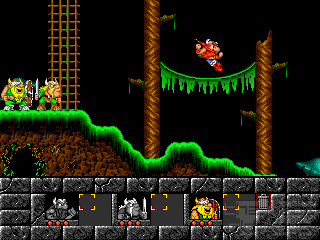