Commander Keen in Invasion of the Vorticons
for PC (DOS)

Billy Blaze, better known as Commander Keen, is stuck on planet Mars after the evil aliens stole vital parts from his ship. Now there is just one thing to do if he wants to save the earth from their attack and that is travelling around through their weird constructions to recover what was stolen.

There are just two tools that will help in that quest, both alien artefact of great power: the ray gun that stuns most of your enemies, and the pogo stick that allows you to make really high jumps. But do not abuse from the first, as its battery has a limit of shots (even thought it can be increased getting more guns), and jumping over your enemies tends to work as well.

Not counting that, this is in base what you would expect a platform game to be, there are lives (which become a nuisance as they make you save and load when you have few) that increase when reaching point ranges. And there are those points, got from several objects that await around all the level.

But several things make it different from the average platforms game. First not all of the enemies have claws and big mouths, there is a good bunch that only can push you to pits and several dangers, or that shoots in easy to avoid intervals so you can jump over them. The game is about finding your way more than anything, the levels are built with that idea, and while some are harder and others simpler always expect several paths, traps and hidden things that will require observation. Along with key cards to make you walk around, something that with worse maps would be a nuisance.

There is a variety of places to see: there are ice levels, dark levels, confusing levels, and at least one secret one. All of which helped by the smooth and easy to use control system keep the game fun from start to end.

Shareware meant games that ranged from bad to good, but this one is really great, and one that would show that not only consoles could have well made platform games.

Mr Creosote:
I've finished James Pond 2, but only using an unlimited life cheat. You're right, you can't save, but I just kept the computer on all day and paused the game

Mr Creosote:
Highly overrated game in my opinion. Not particularly bad, but absolutely nothing compared to what other games of the same genre offered at that time. Just not for owners of text-driven typewriters, of course. However, since the latter won the 'format war', this game is now held up as an example of genius - because there simply wasn't anything else on that particular machine. Which is nothing short of a heavy distortion of history, if you ask me.
Wandrell:
Feel free to share anything about Commander Keen (1990) here!
[Reply] 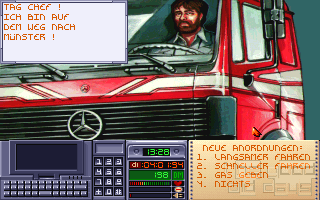