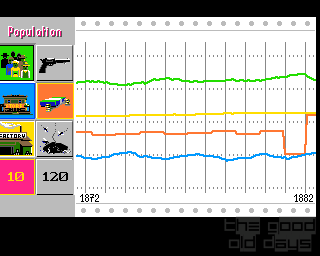 A game which needs no introduction, because every single person on this planet has already played it or at least one of the hundreds of sequels and offshoots it spawned. This is the original game which started the 'Sim' craze. Ironically, it actually isn't a simulation game, but virtually the epitome of the non-war strategy genre, but its influence can be seen even today when people call pure strategy games 'simulations'.

So you build your city... and that't it. Sim City doesn't have a 'higher goal', you don't have to conquer anything or even earn lots and lots of money. The journey is its own reward, and the only limit is the size of the map (which, admittedly, could really be larger...).

Another speciality is that you can't actually build the most important things which make a city. Sure, place a fire station somewhere, and it will be there, but to get people, you can just assign three different kinds of zones: residential, commercial and industrial. Whether these zones are populated depends on a number of factors. For example, you have to take care that there's a street nearby, that there's electricity and so on. Apart from these basic prerequisites, there's also the question of balance: Unlike in real life, your city has to be self-sufficient, i.e. you can't build a purely industrial city or one where people just live and drive somewhere else to work every day. So, the amount of space for one of these three purposes has to complement that of the other types.

So what you have to provide is a working infrastructure, and people will come to live in your city. This leads to new problems, of course. You have to deal with overcrowded streets (build more of them, and build rails), crime (build more police stations and provide them with more funds), pollution (don't build too much industry near residential areas) and so on. The evaluation of your progress, including the problems troubling the inhabitants most, you get once a year helps, just like the very useful map of the city showing lots of statistics (like the mentioned things, i.e. crime, traffic hotspots,...).

If, in spite of all that, you still get bored, you can try yourself at managing special crises. There are disasters which occur randomly from time to time (and you can also trigger them manually), like earthquakes, fires and monster attacks (just like in real life). There are even a few historical scenarios in which you start with a big city already, and one of these disasters will occur right at the beginning.

There weren't many games made for the CDTV on the whole. Many of these were just straight ports of floppy games. Others were complete crap. Sim City is one of the very, very few examples which did it right. In addition to the (already brilliant) floppy version, you get three more 'tilesets' from which you can choose: medieval, western and futuristic. The game still stays the same, but graphically, there's a difference between building a city in 1000AD and 2300AD. Buildings also get new names depending on the tileset. For example, instead of electricity, you have to take care of water supply in the medieval scenario, and the trains become monorails in the future. To get these differences across even more effectively, there are two zoom levels (one for more overview, another for eye-candy).

The only thing which could be interpreted as a downside of this version is the controls. Obviously, you have to use the CDTV gamepad. That's great it you want to build straight roads (an actual problem in the mouse-controlled original), but Infogrames (who did the port) also got rid off the always-visible menus. Again, more overview (which is good), but it makes all the options and functions available only indirectly. The second button is used to cycle through the different menu screens, so to build a stadium, for example, you have to press the second button, select the stadium, press the first button and then place it on the map using the first button again. Not too bad, but consider there are more menu screens, and you can only cycle through them instead of calling them directly...

Let's stop splitting hairs, though. Sim City is a masterpiece, and this is one of the (if not the) best versions available. Definitely recommended to everyone!