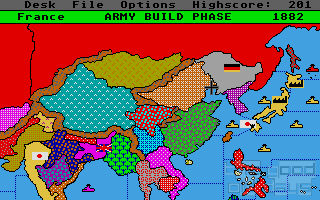 War without bloodshed? Easy, just don't show the individual's fate, but take it to a more abstract level. A way more abstract level: Push around wodden blocks on a world map, and suddenly, even genocide becomes fun! Like in Colonial Conquest.

Six superpowers of the late 19th century are sending out their armies to achieve world domination. They haven't yet learned the concept of proxy wars, but at least they've (mostly) understood that their own home lands aren't the best suited battlefields (not ruling them out completely, on the other hand).

So they're going for the 'less developed' (i.e. less militarized) countries to 'colonize' (i.e. occupy) them. More land means more money and thus more troops again. Until the big clash with another superpower (which has fed likewise) is unavoidable...

What sets Colonial Conquest apart from other Risk-type games is a few more options. There are both ground troops and navies, countries don't necessarily have to be taken by force, but you can try to bribe them, you can support other minor countries financially to have them slow down your main enemies, you can build fortifications and so on. On the other hand, it's still very accessable (groundbreakingly so, compared to what SSI released at the same time otherwise).

Two things are especially noteworthy. First, the tries to slow players with exceptionally power down a little. New armies can't just be arbitrarily placed on the map, but only in one of the country's production centres. Those are in the heart of the home land, of course, i.e. potentially far away from the front. Also, the number of moves per turn is limited, so it might not even be possible to move all armies. Second, the differences between the playable countries. England has the best ships and armies, but they're expensive. Russia, on the other hand, can easily raise huge piles of fighting forces - which are less effective. Also, it only has one supply centre, so if that one is occupied by another country, it looks very bad.

There are three scenarios (each on the real earth, no random maps), each of which throws the player into the 'historical' situation. Of course, given the lack of realism of this 'light' game, nothing will even develop as it actually did from that point on. But that's not the point of the game anyway. That is entertainment. Which CC provides very well. If there's anything to critisize, it's the non-transparant battles (you often only see how something turned out at the start of the next turn - and you'll never really know why it went the way it did) and the lack of even the most basic diplomatic options (how about negotiating peace?). If you're looking for Balance of Power, Colonial Conquest will disappoint. It doesn't even try to be like that, and it does what it does really well. 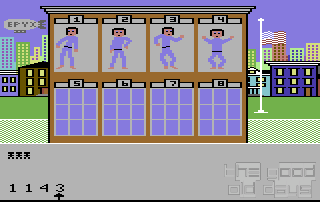