Uridium
for C64
Also available for: C64 (Uridium Plus) 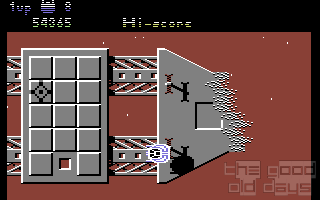 The alien invasion of Earth is afoot, and there's just no way to stop the attacking forces by conventional means. Even if the puny earthling forces manage to destroy one wave, countless more are just waiting to take its place. So the humans recognize their only chance is to go to the source and cut off the invaders' supplies.

Those are provided by 16 huge spaceships. Each is responsible for one raw material (therefore, the levels have names like 'zinc' and 'silver'). The player jumps into the seat of the small, fast and agile Manta ship to blast these flying fortresses up.

At least since Star Wars, everybody knows a small fighter can't just fire its guns at a huge battle station and expect it to explode. Unlike Star Wars, the solution in Uridium isn't quite as ridiculous. Really, what kind of engineer would leave a glaring security hole open?

Flying over the surface of the supply ship first, you fight off its defending fighters while avoiding to crash into radar dishes and anything else sticking out from the surface. Once you've really wreaked havoc, you land on the alien ship, enter it and trigger the self-destruction sequence.

The latter part only consists of a tiny reaction test in order to get bonus points (which is anything but unimportant, because points equal extra lives). The real meat is maneuvering the Manta over the 16 supply ships. This happens at an amazing speed. At the same time, the animation isn't just fluid, but absolutely amazing as well! The Manta's rotating (to get through really narrow passages and to avoid enemy projectiles) and turning (to fly back in case you missed a few targets) looks so good that you'll do it more often than really necessary.

The downside of this speed is, as so often, the difficulty level. Uridium is an unforgiving game. One hit, and one life is gone. And at 50 frames per second, anything happens so quickly, that you sometimes have little chance to react at all. If you feel up to that challenge, there are countless hours of fun waiting in this game. A masterpiece!

Mr Creosote (2020-08-15):
Well, they have a huge amount of stationary guns plus lots of fighters defending. So it seems the designers followed the eggshell approach to security: hard on the outside, but once this is breached, there is nothing left.
Herr M. (2020-08-15):
Hmm, actually the security holes in this game's capital ship design sounds even worse: Imagine Luke landing with his X-Wing on the Death Star and walking up to the self destruct.