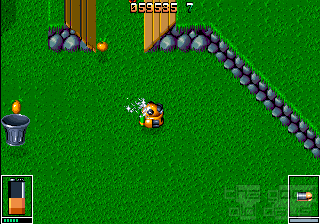 Virocop was one of the games which really got a lot of attention before it was released - at least from the readers of one specific German Amiga magazine: Amiga Games. This magazine published a “developer's diary” over several months, then it suddenly stopped - but the finished game didn't appear. No explanation, no comment. A lot later, they mentioned they had dropped this article because they couldn't squeeze these pages in anymore. Never sounded too believable to me. More likely that there just wasn't enough happening anymore. Still, it was quite interesting to read every month how the idea developed, how changes to the concept were made (it changed from “Tanky” to “D.A.V.E” over time), how the graphics changed from hand-drawn sketches to actual screenshots.

A lot later, the game was actually released under the title Virocop. The protagonist is still the same D.A.V.E from the project name, just that he had to take a step back from the game's title. D.A.V.E is a small robot (as opposed to the tank of the original concept) which hovers and glides over the ground. Its mission: to save a 'virtual holiday themepark from rampaging viruses'. I.e. to shoot its way through many levels full of enemies.

The levels are split into 'worlds' with four levels (plus a boss at the end) each. Each world has one common theme. All of them have one thing in common though: they look a lot as if they were made of Playmobil, Lego or another toy line. The first world is related to sports, so you drive/fly over football fields, billiard tables and racing courses. It is fittingly populated as well.
A special feature about the worlds is that they're three-dimensional. Two dimensions have clearly been 'borrowed' from platformers and combined with the two dimensions of the classic shooter, it is a nice and fresh mix.

Between the levels, you have the opportunity to buy different weapons in a shop and attach three of them to your robot. All kind of weapons are represented: ammunition-based as well as energy based, weak and fast as well as slow and powerful. There is never an 'ultimate' weapon, it always depends on the type of enemy which is best. It is of course a bit silly to be forced to decide what weapons to take with you before you know what those enemies are...

One of the best things about the game is the extremely smooth animations. Watching D.A.V.E turn is a pleasure! The other sprites look quite good as well. The 'angular' style of the surroundings is a nice touch. Not all 256 colours are used, the highest I could count on a picture was 64 - usually, there are only approximately 48. That is why the AGA and ECS versions look almost identical. The AGA version supposedly has more levels (according to the box - I have to admit I have never compared the two versions that extensively).

To conclude this review: there is something called 'level design'. The first world is excellent fun, it is easy enough to let you come through, challenging enough to keep you trying and at the same time fair enough to give you room to make something better or worse (don't take this for granted!).

Then comes the very first level of the second world. You're immediately hunted by more than ten enemies at the same time. Shock! All of sudden, being careful is not enough anymore: fast reflexes and a huge dose of luck is required instead. I shouldn't be too hard about the second world though, compared to the first one, it might be bad, but compared to what follows, it's still quite good! Every world is always a clear drop in quality from the previous one. The ending is almost unplayable and the 'level-layout' has become extremely boring and uninspired by then. What did Graftgold do in the time from when the 'diary' ended and when the game was released? Only designing these worlds? Did they lose interest halfway through? I don't know. What I do know is that you should try Virocop for the sake of the first levels. Do it. Now! 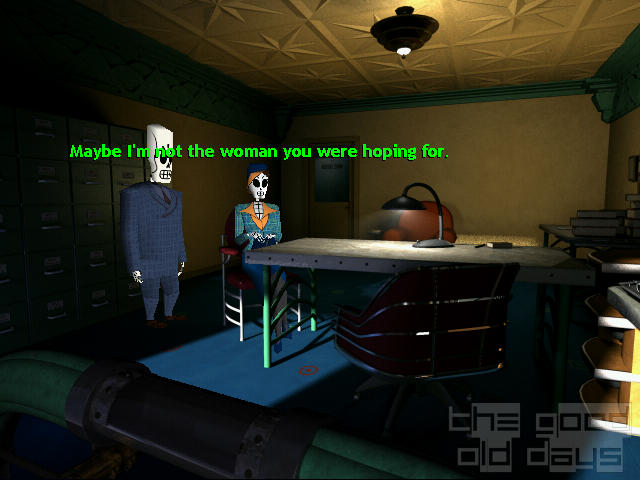